In the next 10 days, with billions of dollars expected to flow in the Bitcoin market, we could see a larger magnitude of increase in the trillion-dollar crypto asset.

US President Joe Biden said that the US is on track to send 100 million stimulus checks in the coming 10 days. During the same period, they plan to administer over 100 million COVID-19 vaccine doses.

“Shots in arms and money in pockets – that's important,” he added.

As of Monday, 71 million Americans had received at least one vaccine dose while 38.3 million have been fully vaccinated, according to the Centers for Disease Control and Prevention.

Biden also said that he would appoint Gene Sperling, the formal national economic advisor, to oversee the implementation of the $1.9 trillion COVID-19 relief package signed into law by the President on Thursday.

The bill includes $1,400 stimulus checks and other direct aids for families. “We're just getting started,” Biden said on Monday.

“By the time all the money is distributed, 85% of American households will have gotten $1,400 rescue checks.”

While some people have already received their payments, millions more are set to get theirs on Wednesday.

Billions of Dollars Coming In

This is big news for Bitcoin, as the majority of Americans to receive these stimulus checks are planning to put them into the cryptocurrency, according to a survey released by Mizuho Securities.

The poll of 235 individuals found that two out of five recipients plan to invest at least some of the proceeds into Bitcoin and stocks. Around 10% of total gross payments or $40 billion for the $380 billion in direct checks could be used to purchase BTC and stocks.

Given that the $1,200 stimulus check from April invested into Bitcoin is currently worth $11,100, it makes sense. 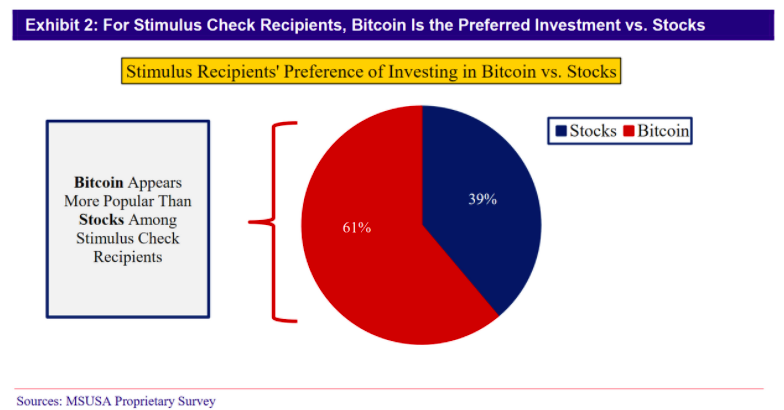 A Deutsche Bank survey from late last month also found investors are eager to use the current round of payments for trading.

The Mizuho survey meanwhile found that Bitcoin was the preferred choice for the deployment of this money (much like in the UK), with 20% of recipients expected to put 20% of their checks to Bitcoin and/or stocks while 13% expected to allocate 20% to 80%, and 2% to put 80% or more into the markets.

“Bitcoin is the preferred investment choice among check recipients. It comprises nearly 60% of the incremental spend, which may imply $25 billion of incremental spend on bitcoin from stimulus checks,” wrote Mizuho analysts Dan Dolev and Ryan Coyne. “This represents 2-3% of Bitcoin’s current $1.1 trillion market cap.”

Over the weekend, Bitcoin price hit a new ATH at about $62k, currently trading around $55,500 following a correction on Monday.