Bitcoin (BTC) Price
60% of Bitcoin Supply Not Moved in a Year, What Does it Say About the Next Bull Run?

May is coming to an end and bitcoin is looking to stay above $9,500, ending the month with about 8% returns.

The market sentiments are reacting and approaching “greed” once again. But this is the third time the sentiment is pushing to a greedy state and out of the fearful area. The good thing is we have stayed out of the “Extreme Fear” area for over a month now.

However, there have been no significant changes in volatility over the past week but that can change quickly.

For the past two months, the last days of the month have recorded some of the large daily moves.

According to Income Shark, Bitcoin can yet again drop to $9,200 level with some “weird weekend action.” But it’s possible we will make our back to $9,600 level and if we break it, we could have a ride to $10,000 and if rejected, it might be the time to short.

$12K is on the way. pic.twitter.com/URwDVEFeSz

Interestingly, there aren’t many bitcoins to be bought, especially given that Grayscale is absorbing more BTC than what’s been minted since halving. Already, its Bitcoin Trust holds about 2% of all BTC supply.

Meanwhile, the effects of halving have already started to dissipate with the hash rate increasing. The imminent Chinese monsoon would further balance things out as it would make electricity cheaper and “lead to a temporary increase in the rate of block generation and hence bitcoin production and sell pressure.”

Bitcoin velocity has also been dropping sharply since halving. The transaction activity might be seeing a temporary slow down but the “longer-term trend remains positive and is trending upwards,” noted Arcane Research.

An Exodus of BTC from Exchanges

We might not be in a bullish territory yet but the market is seeing bullish indicators. 60% of bitcoin supply hasn't moved in more than a year, a level last seen before the bull run of 2017 started. This increased level of hodling behavior can also be seen in the BTC balance on exchanges which have reached their lowest level in over a year, as per Glassnode.

One explanation of this exodus is the optimistic long-term sentiment that has investors withdrawing their funds from exchanges in favor of hodling in anticipation of a bull run. The growing number of bitcoin whales support this just as the continued holder accumulation over the past two months.

But this isn’t the whole story, this withdrawal trend is different for different exchanges. 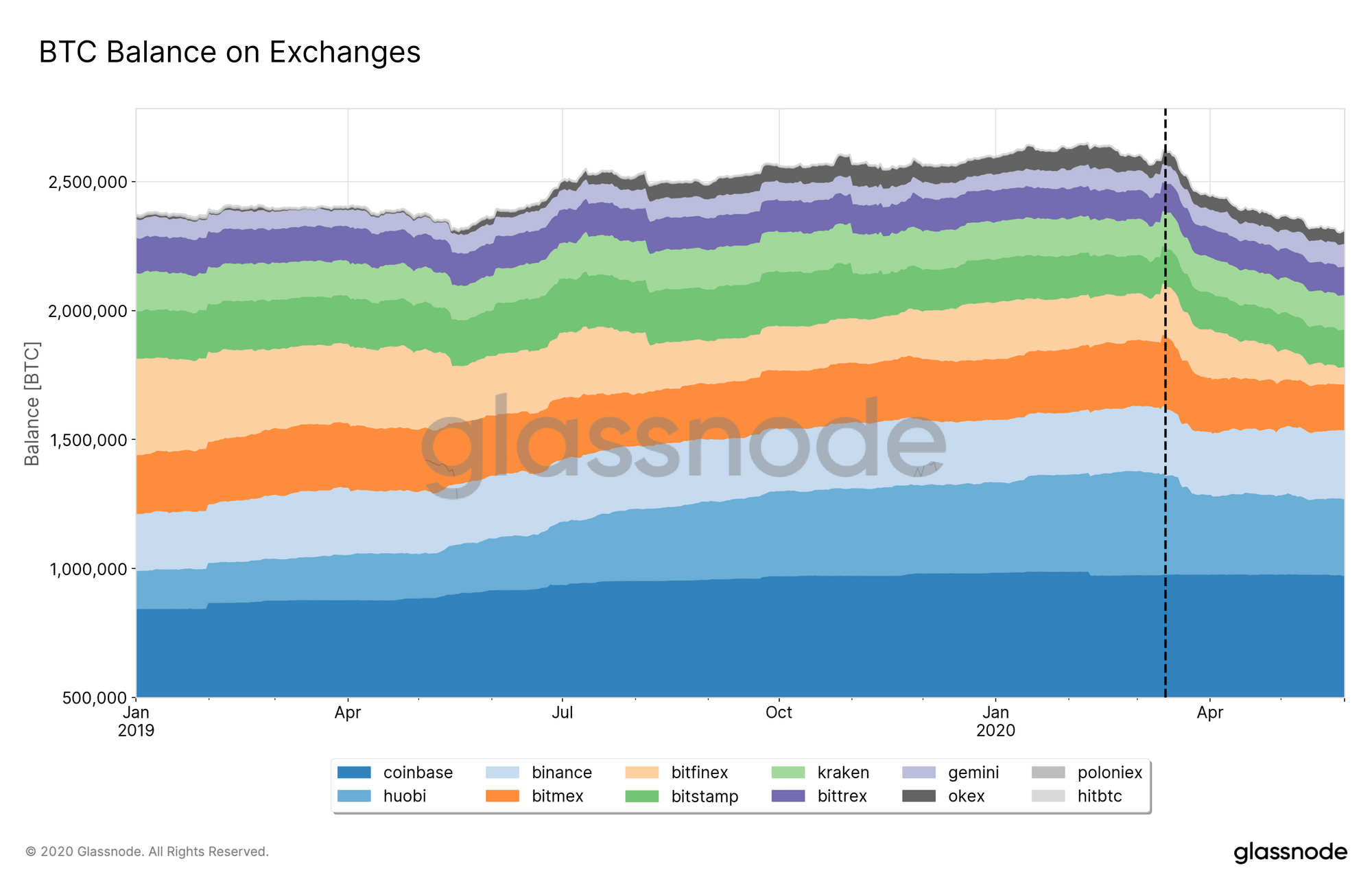 In contrast to this, Binance and Bitstamp saw a slight increase in their BTC balance. Coinbase, however, remains the most popular exchange for holding BTC which has a balance of 968,000 BTC, decreasing only 0.2% during this time.

So it’s not just investors choosing to hold, or using cold storage for hodling, there could be many reasons at play.

Lack of trust could be one such reason in the case of BitMEX which experienced two DDoS attacks on Black Thursday. But this still doesn’t justify the continued decline of BTC balance on the exchange and why these funds haven’t moved onto other exchanges.

Moreover, even before the crash, the BTC balance of Huobi and Bitfinex has been on decline which only accelerated after Black Thursday. When the massive sell-off occurred, Bitfinex’s BTC balance had already dropped over 47% from its highest point in Dec. 2018.