In a tweet made out on Wednesday, May 29, 2019, CEO, Changpeng Zhao classified current organizations and projects in the Binance Coin ecosystem along with projects issuing on Binance Chain. As seen below, the former includes categories such as ‘Buy, Entertainment, Finance, Payment, Services, Travel, Store, and Exchange.’ 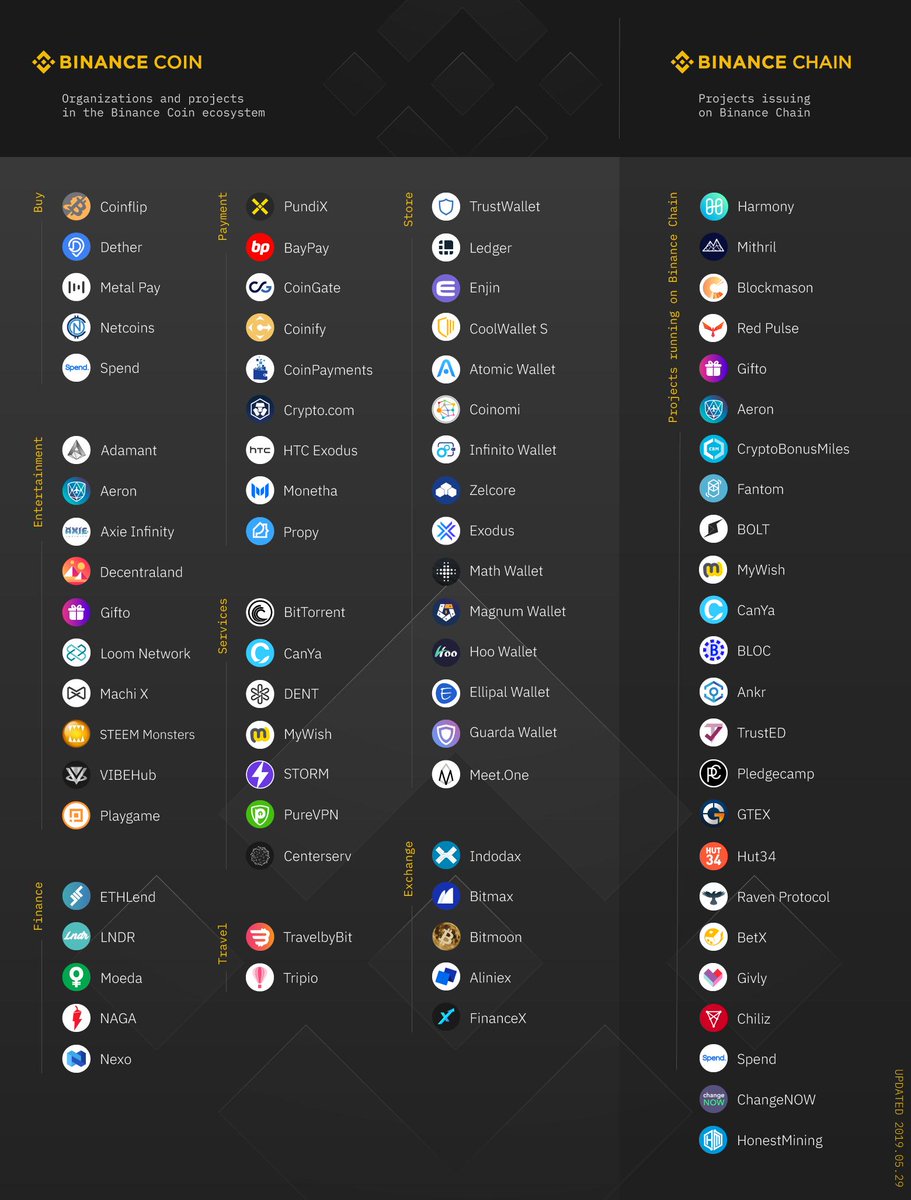 The aforementioned showcases different ways in which the Binance Coin (BNB) can be used. As per news outlet, Crypto Slate, there are at least 83 different use cases. This has supposedly been updated from March 2019’s 55 uses – with an approximate 50% increase in use cases. In addition, Binance’s native blockchain dubbed, ‘Binance Chain’ has since welcomed several projects – most of which are planning to launch their native tokens.

The team behind Binance Chain is anticipating growth for said platform, as they trust that an increase presence on the platform, along with the use of said tokens is surely to increase BNB’s value.

Since CZ’s post, it seems like members of the community are expecting more from Binance in terms of the different use cases possible, as several have expressed suggestions for token inclusion. Here are some the sentiments that have been shared so far, found in the comments section:

Where is $OWT @openweb_network ? They migrated to @binance chain and you even retweeted their ANN.

could include @travalacom in “Travel” section, these guys are lacking enormously and above all they can use $ BNB to pay for hotels. 🤟

I don't see @nimiq on your list, it would be a great addition and a unique project😃 pic.twitter.com/lXGxFRhTjp The above looks at Binance Coin’s year-to-date progress, where CCN pinpointed that it reached its all-time high on Sunday, May 26, 2019. The news outlet further expounded on possible reasons why BNB has been striving – the main one being continuous token burns.

More specifically, it has been reported that Binance destroys 20% of the BNB tokens on a quarterly basis, which reduces supply and increases its overall value. The burning process is said to halt the moment there only remains 100 million tokens in circulation.

As for the popularity associated with BNB, it has been noticed that a significant portion of interest comes from investors as opposed to traders. The chart above looks at the total accumulation of BNB over time. The drop is supposedly associated with Binance’s recently $40 million hack, which as previously reported by Bitcoin Exchange Guide (BEG), was handled by the team with poise. Despite its occurrence, it seems like BNB is doing just fine, as there is a clear upward trend up until today.

Further expounding on what one can expect in terms of BNB’s value, CCN noted that:

“Having been established its all-time high at $38.65, Binance Coin is now looking at a ceiling-less territory to the upside. The asset has no earlier history in this zone, which means its price can go anywhere based on pure fundamentals.”