The months-long probe is focused on whether the derivatives platform — not registered with the agency — broke rules by allowing Americans to trade. This could be what spooked investors and resulted in a massive Bitcoin outflow from the exchange.

That month, nearly 40,000 BTC were withdrawn from the platform. However, according to Token Analyst, this number was higher at 50,000 BTC equivalent to $524 million.

Analyst, Ceteris Paribus first pointed this out in early August,

“Bitmex had $524M net outflows in July. It had never had more than $100M in a single month. 2018 brought in $1.3B, and there was not a single month where outflows were greater than inflows.”

However, BitMEX Research begs to differ as it states that BitMEX net flow figures by the Token Analyst have “begun to deviate significantly from the actuals in the last 4 months.” This, it wrote can be checked by using the blockchain balances of 3BMEX and 3BitMEX addresses.

However, the drastic outflow is still obvious and CFTC probing into the exchange is not the only factor behind the big shot to BitMEX’s outflows. Binance could be another factor.

The world's leading cryptocurrency exchange announced margin trading platform (3x) — in comparison to 100x on BitMEX — in July, a few days before the investigation into BitMEX.

“Activity did a 180 in June. First thought was traders entering alts, but beta margin trading opened in June, and the large spike in July is right before they opened it to everyone,” Ceteris Paribus observed about inflows and outflows on Binance. He further made note of the stats, in comparison to $66 million in net flows between January 1st to June 13 (ex. May downtime), from June 14 to 26 July, $192 million were recorded in Bitcoin flows.

“Not only have inflows outpaced outflows recently, but total average dollars being deposited/withdrawn have spiked 3x as well,” he said about Bitcoin flows. 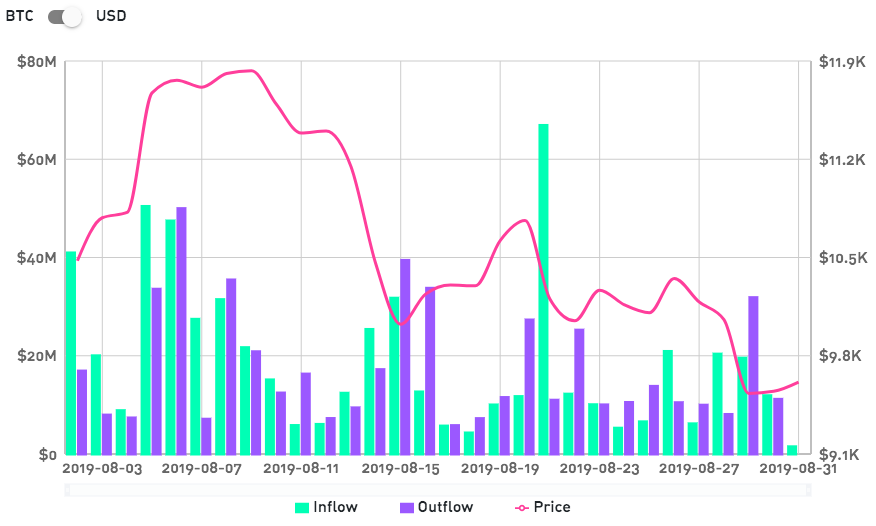 July, however, has been a bad month for Bitcoin as price went down to $9,150 level. The situation has started to get better but it’s still not made its way back to early 2019 levels.