In yet another drop this week, Bitcoin fell even lower to as low as $11,390. Since falling to that level, we have recovered a bit to move back above $11,500.

The next upwards resistance level for bitcoin is $14,000, according to Simon Peters, an analyst at eToro.

“If prices continue to climb, it will test investors’ mettle,” he said. “I would expect to see exchange inflows increase as investors look to crystallize their gains potentially. This could push the price back toward $12,000.”

If we hold that, we can consolidate for a bit and have some decent bounces.

Losing the zone and I think the CME gap at $9,700 area is a serious scenario.

Meanwhile, Bitcoin’s drop saw the broad crypto market getting red with heavy losses resulting in wiping out $19 billion from the entire market.

Also, the funding rates in the altcoins went from “outrageous exuberance to negative funding,” in these last few days. “Now you can get paid to be long,” noted trader and economist Alex Kruger.

As bitcoin struggles to get above $12,000 level, a push to the volatility higher has the Bloomberg Galaxy Crypto Index hovering at 600 level, which has been acting as resistance dating back to mid-2019.

For this index to see further increases this year, this level needs to be broken and remain above that. Moreover, the Moving Average Convergence Divergence (MACD) indicator entering a negative divergence indicates future gains are hard to come by in the short term. 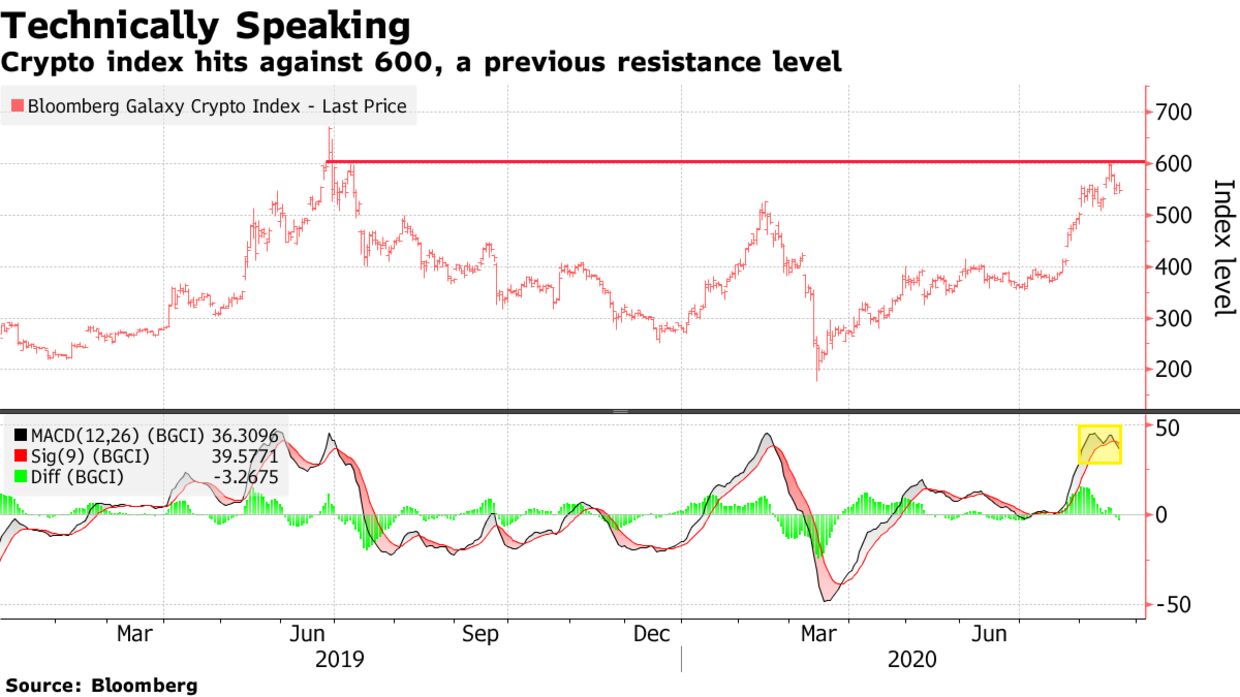 The good thing is the crypto index is in an uptrend, and the ongoing correction could be just a consolidation phase.

As we reported, it is the strength in the US dollar that is seeing every other asset dumping. The crypto market is also taking its cue from the USD, just like gold and other risky assets.

“Strong dollar gains are really weighing on all risky assets, and you’re probably seeing a little bit of exhaustion after rallying up to that fresh 12-month high earlier in the week,” said Ed Moya, senior market analyst at Oanda Corp.

The big event coming up that could further spell more losses for the bitcoin and crypto market is Federal Reserve Chairman Jerome Powell delivering a speech at Jackson Hole next week on August 27.

During this annual symposium, he will be talking about the central bank’s monetary policy framework, with a focus on a new inflation strategy.

“This has been the major market driver since July, bigger than the fiscal package and coronavirus statistics,” said Kruger. “All asset classes. This is all one big trade now.”

A similar opinion is shared by trader Cantering Clark who says the “headline risk is high” here given the relation Bitcoin, gold, and USD has been having.

However, if Bitcoin falls, that won’t be out of the norm as during the last bull cycle, from mid-2016 to the end of 2017, the largest digital asset had nine corrections ranging between 30% to 40%, only to make it's way higher.

So, if history is any indication, these are just ‘buy the dip' opportunities before moving onto new highs.