For just over a week, Bitcoin registered gains and went more than 21 percent up to $4,192 yesterday, only to take a hit and drop back down to $3,820 registering a loss of 8 percent in a matter of few hours.

At the time of writing, Bitcoin has been trading at $3,837 with 24-hours loss of 7.96 percent. The leading cryptocurrency is managing the daily trading volume of $10.78 billion that has been on a surge since yesterday.

“The cycles are getting elongated so longer cycles creating the same shape makes sense. The similarity in NVTS level and shape further supports the assertion.” 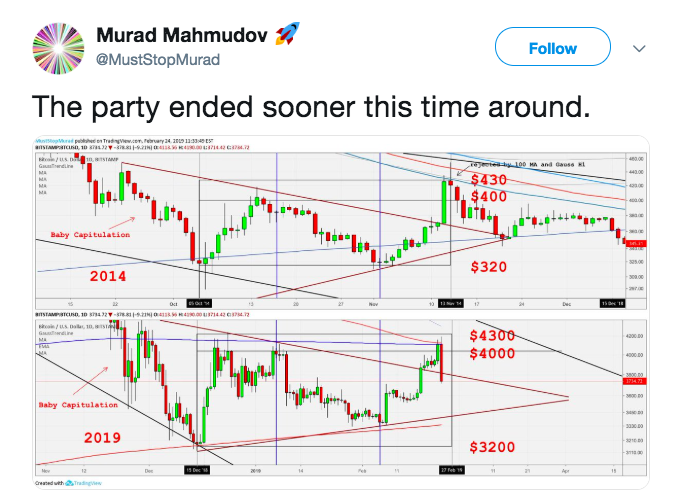 According to the crypto trader, Eric Choe, we could put in a lower-low at around $3,800 level. But there is potential for a lower high as well if bulls cannot break the $4k mark. He further notes, bulls need to reclaim back above or the start of a mini-downtrend is expected to target $3,680.

Since September 2018, Bitcoin hasn't been able to record two green candles and as the crypto trader and investor Josh Rager says, this week we are going to see more red and could further experience consolidation.

“We haven't had two green weeks in a row since Sept '18. Expect this week to be red possibly followed by consolidation if the volume decreases. And if buying volume doesn't pick up BTC is likely to roll over to retest previous support.”

According to him, Bitcoin is going to $2,800 or even below in the coming months as he shares,

“It's going down eventually IMO – there are so many variables though. Volume, horizontals, and sentiment — if everyone is mega bearish it won't do anything. It dropped before people thought it would and I expect the same if it drops to new lows.”

Some analysts are also calling out for Bitcoin go down to $1,000 level but according to Twitter user planB, this is unlikely

However, for now, in the short term, the reds are expected to permeate the market as Rager further explains why the current movement is even more bearish as,

“The candle, This retraced 10% – twice as much as that tether spike – so it's actually more bearish now. Just know it's bearish and will like to drop the consolidate IMO.”

If this week, Bitcoin is going to see more red, it would be interesting to see where exactly it will go from here, back to early February level at $3,400 or around $3,600.