Bitcoin in a Classic Range-Trading Market; Below $10,000 Out of the Picture?

Bitcoin (BTC) Price
Bitcoin in a Classic Range-Trading Market; Below $10,000 Out of the Picture?

The market remains dull and boring, with volatility continuing to decline. Bitcoin is trading around $11,400, barely in the green with $1.8 billion in ’real’ trading volume.

The digital is back to moving downwards today. However, the stablecoin supply ratio (SSR) also spells “increased potential for an upwards movement” in Bitcoin because currently, stablecoins have high buying power over bitcoin. OKEx notes,

“Bitcoin has been witnessing a relative shrinking in trading volumes, indicating that active selling continues to weaken. However, the rebound from yesterday was not very strong either, which means traders should be watching the important support at $11,200 for now.” 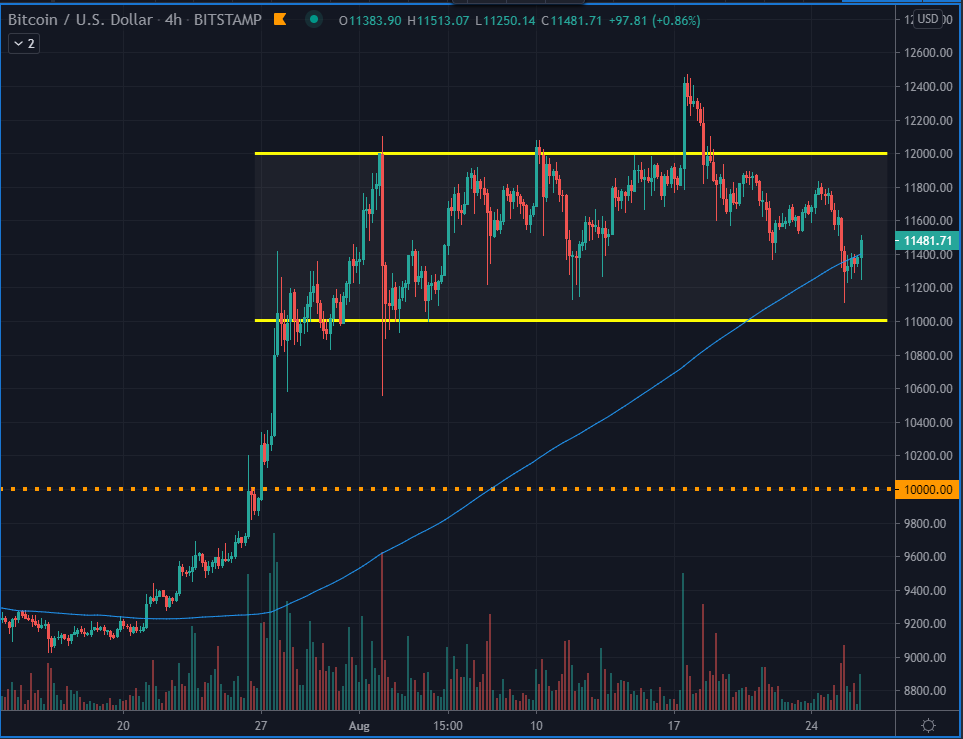 Bitcoin has fallen but found support just above $11,000 and now has a “classic range-trading market.” The same is the case for the US dollar, which many have been expecting to bounce but has fallen yet under 93. Analyst Mati Greenspan said,

“No doubt anticipation of the Fed meeting and a new inflation regimen has something to do with that.”

In today’s virtual conference, the Federal Reserve is expected to keep short-term interest rates near zero in the coming years and a new approach towards relaxing the inflation that could see it temporarily rise above their 2% target. Trader and economist Alex Kruger says,

“I expect an ultra-dovish Powell and continuation higher, but indices are finally and without a doubt overextended from a technical standpoint, could turn fast if market unsatisfied.”

All the anxiety about inflation among individual investors, especially, has people stacking sats in their search for hedges. Michael Novogratz, founder, and chief executive officer of Galaxy Investment Partners in New York says,

“Gold, Bitcoin—both of them, I think, are protections just against this uncertainty that’s out there.”

According to him, who has about a quarter of his net worth tied up in cryptos and related businesses. At the same time, bitcoin derives much of its value from believing it’s worth something like gold; it is more attractive because it is still in its early adoption stage.

“Though it may still be a bit early to tell, at this point, it's looking more possible than ever before that we might never see bitcoin below $10,000 again.”

“I know it's just a meme, but who knows; it might just be happening before our eyes.”

As we reported, on-chain analyst Willy Woo who sees a bearish structure inside the macro bull structure, if the leading digital asset breaks the critical support level is $10,900, BTC can then fall lower to the next support level, $9,700 which would also fill the CME gap.

Additionally, if the broad markets start moving downwards today, bitcoin is likely to move south as well “in the mid 10ks.”