The largest cryptocurrency first started moving on July 20 when it was trading around $9,150, and in just over a fortnight, the digital asset has surged 27.8%.

According to Bloomberg, “Bitcoin mania appears to be almost back in full bloom.”

The market has surely started to move, but the mania is yet to be seen, which the market is expecting to come once we take over the all-time high of $20,000. However, just after crashing from $12,000 over the weekend, a level recorded for the first time in a year, we are back to approaching the higher level from where the next step is 2019 high of $13,900.

Over the weekend, the sell-off came after a huge amount of bitcoin moved to exchanges. But now, they are back to moving out of crypto exchanges. 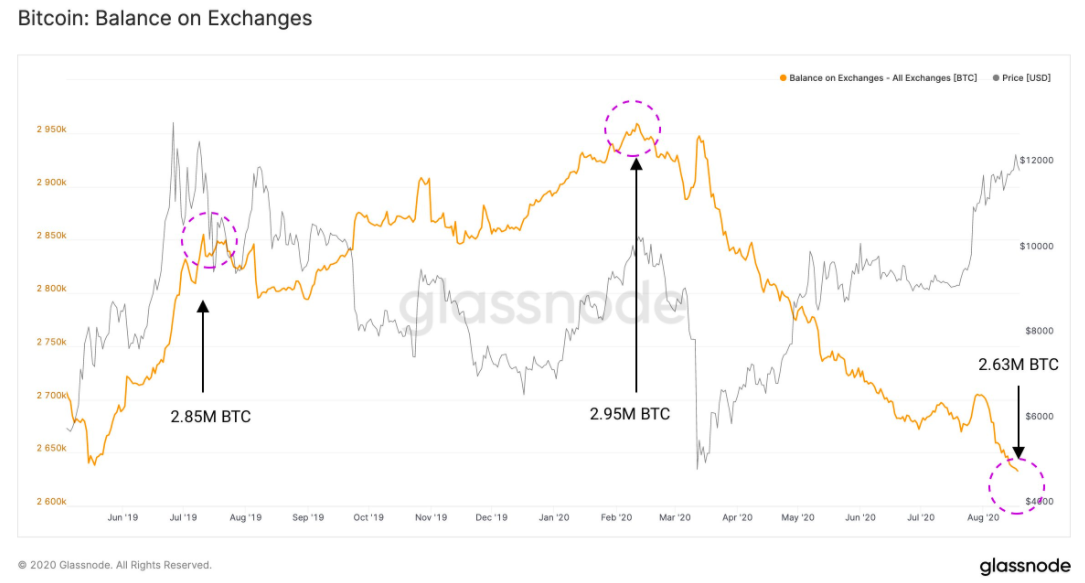 “The amount of Bitcoin held on exchanges just dropped off a cliff. It happened two days ago – whales bought up the selloff. BTC flowing out of exchanges is *bullish*,” noted trader Cole Garner.

According to CryptoQuant, about 68,100 BTC have been transferred from Binance to a newly created wallet, which would be either their new cold wallet or for third party custody.

“Even if it's Binance's, it could be a bull signal since Binance decided to reduce the portion of hot wallets in charge of user withdrawals,” it said.

Adding support to this is the 1-year HODL wave, which further confirms the hodling behavior as bitcoin holders jump to their all-time high.

Just this week, the digital asset garnered extra attention after equity day trader Dave Portnoy, the founder of Barstool Sports, tweeted that he is going to buy all the bitcoins after he invited the Winklevoss twins to explain bitcoin to him. He had previously said he wasn't buying bitcoin and equated it to Mario Brothers.

All of this bullishness is also reflecting on the open interest on CME’s bitcoin futures that continues to grow, reaching over $800 million. CME now holds a record high of 16.5% of all OI in the bitcoin futures market and is on the way to surpass ButMEX’s level of OI at 18.48%.

In terms of price, the best thing for this momentum-based asset, for now, is to go “back down and successfully test that support level and bounce off that. You get that kind of move, and it’s going to be very bullish,” said Matt Maley, chief market strategist at Miller Tabak & Co.