The bulls have come charging as the total aggregate open interest (OI) hit another record high.

“The bullish bias continues to ensure steep and favorable term structure for spread traders. The bulls were also in full force in the options market where the skew and the implied vol smile continues to show bullish market positioning, helped on by the contained nature of volatility,” noted Denis Vinokourov of Bequant.

According to this metric, which shows the year on year percent change in inventories held by miners, miners have started selling BTC again. During the bear markets in 2014 and 2018, there has been lower selling pressure.

But now they are back to selling, which Charlie Morris of ByteTree says is “bullish.”

Bitcoin annual change in inventory held by miners since 2013

Selling more BTC than produced by miners has been going on for the past three months, but over the weeks, it has been gaining momentum, and currently, the one-day MRI is 140.40%.

As we reported, the Bitcoin hash rate has recovered and is already near its all-time highs as miners switch to colder places now that China's rainy season has ended.

After a dramatic correction, the estimated number of terahashes per second the Bitcoin network continues their recovery, which has been helped by a huge adjustment lower in the mining difficulty last week. 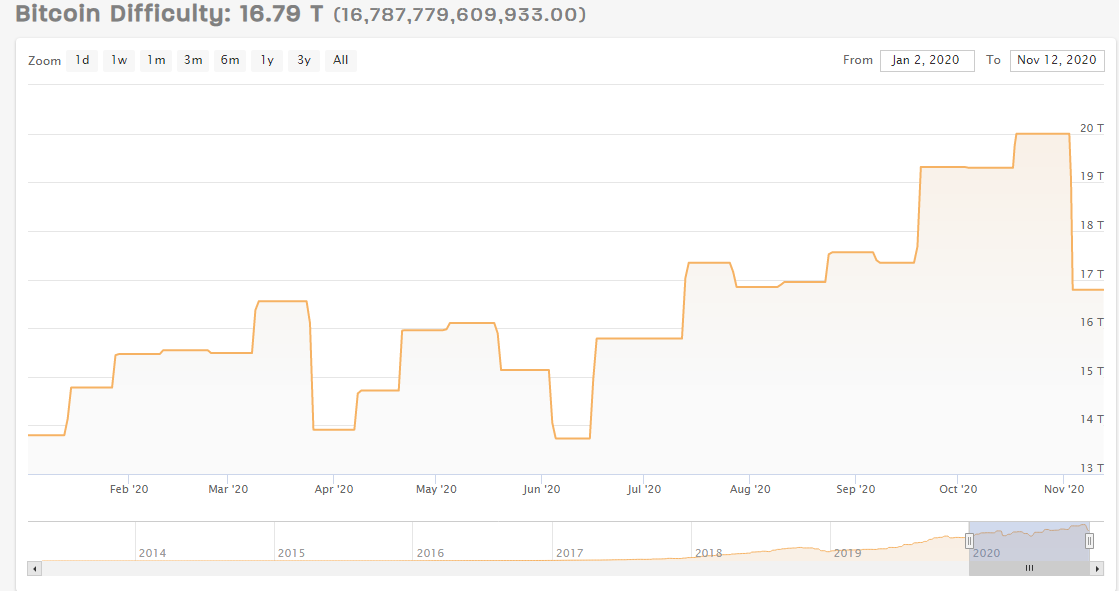 The mining difficulty is expected to adjust lower once again but at a more measured pace of -6%. However, this may change with only just over 4 days left until the next adjustment.

Hive’s shares, which had $1.8 million net income in Q1, gained about 490% YTD thanks to the BTC price jump.

Another publicly traded Bitcoin mining company Riot Blockchain reported over $2.4 million in mining revenue, an increase of 42% from 2019 during the same period.

After increasing its hash power in Q3, the company is further planning to expand its mining operations. Currently having a mining capacity of 556 peta hash per second (PH/s), Riot has four purchase agreements with mining manufacturer Bitmain for a total of 16,600 S19-Pro machines that are expected to be delivered and deployed through the end of Q2 2021.

Miners are simply bullish and expect the price of Bitcoin to continue to rise in the next year.