Mining bitcoin has never been this difficult.

Today bitcoin mining difficulty has increased by 3.6% to hit an all-time high of 17.6 trillion. This was to be expected as recently, the hash rate of the network had also hit an ATH.

Hash rate took a decline last week after the floods in China affected the bitcoin mining operations in the country. Since then, it has also bounced back to 120 Eth/s.

But a jump in both difficulty adjustment and mining hash power has led to a decrease in miner revenues, notes F2Pool, one of the leading bitcoin mining pools. 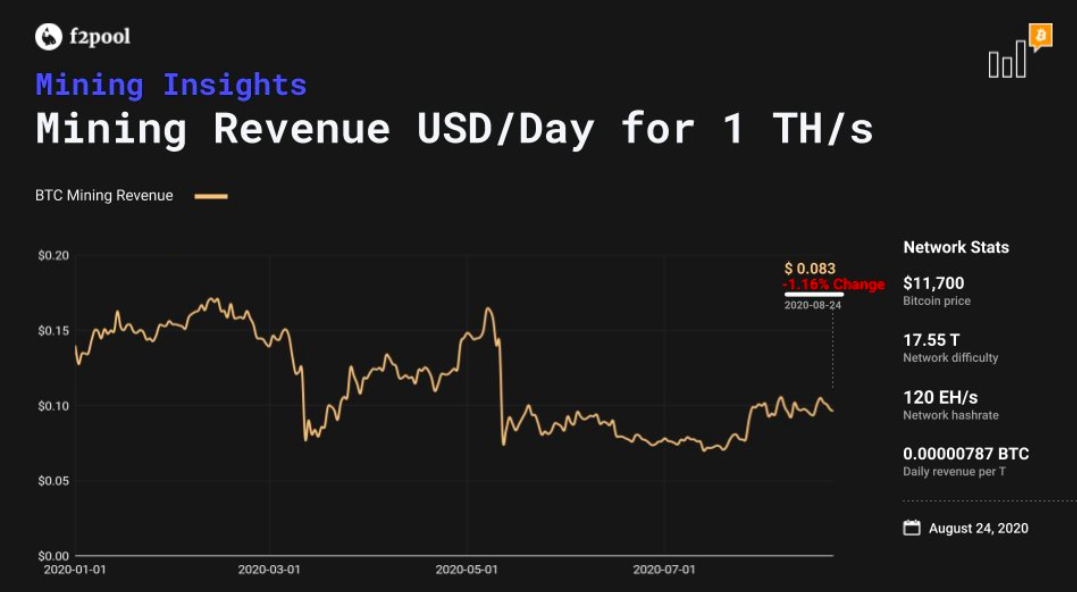 Despite this drop in revenue, all the new generation mining machines remain profitable, even at $0.05 kWh all-in hosting, except for Bitmain’s old-generation S9 SE, which is the only bitcoin ASIC that is no longer profitable under current condition.

As such, in the short term, as a result of declining mining revenue, some of the miners may “turn to other SHA256 networks seeking higher profits,” according to F2Pool.

These miners will come back to bitcoin when either the difficulty drops or the relative price of the bitcoin, increases.

The BTC price has been stuck under $12,000 throughout this month while both retailers and institutions continue to accumulate — the number of addresses with less than one BTC and those with more than 1000 BTC has hit new all-time highs.

The good thing for BTC price is that while people continue to buy more BTC, investors are not looking to take off profits either, with the exchange balance reaching new local lows.

In the bitcoin mining space, one of the largest mining facilities, Energix, meanwhile has announced that it will open its business in mining-friendly country Kazakhstan next month. The mining facility is all set to open its 180 megawatts (MW) data center at the beginning of September.

The facility is expected to contribute 4% of bitcoin’s currency hash rate and will get its electricity from the Kazakhstani grid. Costing $23 million to construct it, the facility would handle electricity required to power 180,000 US homes.

The country has an abundance of cheap electricity, which has helped it move up from sixth to the fourth spot in the world hash rate distribution.