Bitcoin Now Hunts for $52,000 While Decoupling from the Stock Market & Gold

“Things seem extremely overextended,” but all the money printing and upcoming $1.9 trillion worth of stimulus is all set to send Bitcoin “into the stratosphere.”

$50,000 has been finally surpassed as the price of Bitcoin goes as high as $51,717 on spot exchanges and even higher on derivatives platforms.

This has the market cap of the leading cryptocurrency at $956 billion, becoming the world’s 6th largest asset. Now, we only have five other companies — Alphabet, Amazon, Microsoft, Saudi Aramco, and Apple — to beat, for which we have to achieve a trillion-dollar market cap first.

The good thing is Coinbase Premium is looking good after breaking 50k, signaling we can go higher now.

With prices continuing going up, up and more up, the question in everyone’s mind is just how much longer this party might last. Crypto Twitter (CT) has some wild price targets for Bitcoin, which though achievable, their timeline is hard to be pinned down.

“Given the current demand and supply dynamics, the future remains very bright for Bitcoin. We are likely not even half-way through this bull-market and patiently awaiting fresh S&P500 treasury headline announcements,” writes Charles Edwards of Capriole Investments.

The current price levels surely make $100k look like a conservative number for this year's end.

Amidst the raging bulls, one thing is certain, 20% to 30% retracements would surely be coming our way, which are pretty common for the bull market and could happen at any time. However, “downside looks limited” with the medium-term outlook remaining positive.

“A flushout of leveraged traders may be required before continuation,” but that also means, “low $4X,XXX would be an attractive region to buy,” said Edwards.

According to analyst Mati Greenspan, “things seem extremely overextended,” from the perspective of charts and technical analysis as “we've gone from zero to Lambo-moon inside of a few months.”

Having said that, “the sheer interest in the space and new money that is reportedly being pumped into bitcoin as a hedge against copious amounts of brrrrrrr from J-POW and the Biden administration could well send bitcoin right past the $50,000 mark and into the stratosphere,” wrote Greenspan in his daily newsletter Quantum Economics.

As Bitcoin enjoys an uptrend, its correlation with stocks and gold is declining. The 90-correction of the S&P 500 index and Bitcoin has fallen to about 0.21 from a recent peak above 0.50 in October. 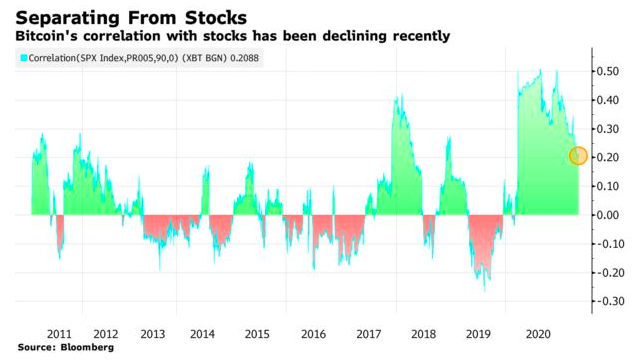 Stock markets have basically been in a bull market since 2009, and based on its earnings per share ratio, they are “really expensive right now, trading at 40 times the actual earnings they generate,” notes Greenspan.

But with all the money printing, the M1 money supply going from $4 trillion at the beginning of last year to almost $7 trillion today, it does make sense. Another $1.9 trillion worth of stimulus is also coming the market’s way.

Institutions Are Sucking Bitcoin's Supply; Adding Fuel to the Fire for the 2021 Bull Run

The Elephants are Moving In; Next Will be the Baby Boomer Wealth: Galaxy Digital CEO