Surprisingly, Bitcoin fell from over 11,000 CAD ($8,190) to 101 CAD ($75) in just a few seconds. This was a flash crash that affected the Kraken cryptocurrency exchange on the BTC/CAD trading pair. This is surprising because there are several firms that have analyzed the exchange and that considered that the platform had real trading volume. Nonetheless, Bitcoin dropped over 98% and reached its lowest point since 2013.

The San Francisco-based exchnage has experienced a massive drop in BTC price on the BTC/CAD trading pair. In a recent Reddit post, users discuss how this was possible and how Kraken does not have a software that prevents this from happening. 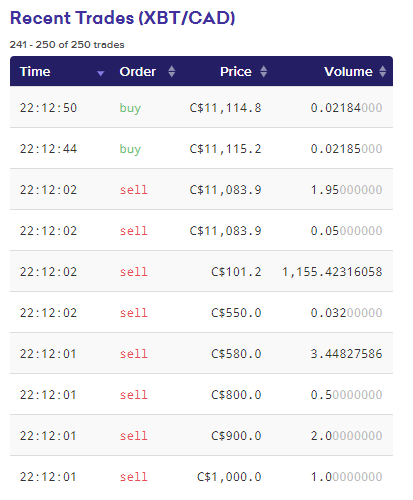 One of the users explained that there was a user that placed a sell order of over 1160 BTC at a price below $101.2. The exchange works by matching the highest bids first, that means that users cannot sell BTC for $100.

What happened can even be considered price manipulation since this is not the first time that something like this happened to Kraken. In the last six months, Kraken has experienced several flash crashes on its platform.

Peter Brandt, a recognized trader and chartist complained about the exchange saying that Kraken had a score of F-. The exchange experienced a fast drop to $8,000 from $8,7000, which affected a large number of users trading on this platform.

The CEO of the platform, Jesse Powell, commented about these issues:

“I think the community has already answered but what keeps us from trading against/front running our own clients is 1. It’s bad for business. 2. It’s immoral. An orderly market is one that does not prevent you from making the trade you want to make. We welcome government liquidity.”

Nonetheless, Powell did not comment anything on the last price movement that affected Bitcoin and the BTC/CAD trading pair.

This Kraken hacker is a genius:

At the moment, the price of Bitcoin is $8,040 and it has a market capitalization of $142 billion, according to CoinMarketCap.