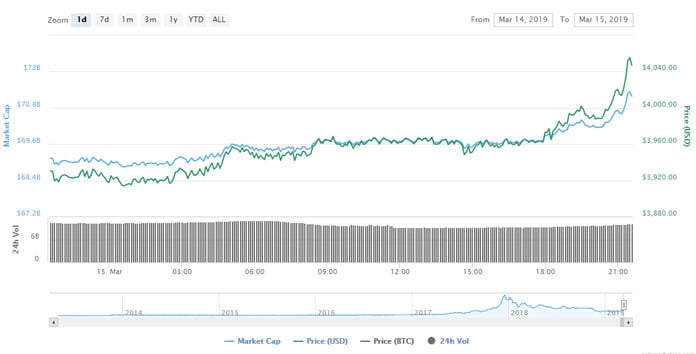 We can see the coin market cap data for the entire bitcoin ecosystem with all its altcoin offspring are enjoying a green bath as well as the value rises from $135 Billion to nearly $141 Billion so far.

We can learn a lot by looking at the past. In the case of the crypto market, this is obviously true as you can see that some patterns repeat over time. One of these trends is the price of BTC. According to the specialists of the area, historical trends often can foresee the ways that the price of the most popular cryptocurrency will move.

Now, according to the prominent trader Alec Ziupsnys, known as Rhythm Trader in the community, there are some very similar points between the market cycle of 2014 to 2016 and today. In both cases, the market has seen a crash and then later it recovered.

According to the trader, Bitcoin uses to follow a cycle of bull runs followed by bear markets. He bets that the worst is past now and that there is a long-term floor established in order for the market to grow. BTC’s growth will begin very slowly, he assures but affirms that all-time highs will be eventually reached at the beginning of 2021.

You can see his price analysis here. On the tweet, he affirms that history does not repeat “but it often rhymes”.

If you are afraid that the industry will lose all hope in BTC, you should know that this has already happened… in 2015. However, 2017 happened despite all the naysayers.

Even some very established traders and analysts like Mati Greenspan have already affirmed that the sell-offs have started and that cryptos are bound to go up again.

At the moment, not a lot indicates that the market might not grow. Only groups like Crypto Integrity, a new startup which is focused on transparency, are concerned. The group states that up to 88% of all crypto trade volume could simply be fake. The company has not shown any data to back these allegations, however, so it is hard to believe them.

Can Bitcoin Go Even Lower?

We all hope that Bitcoin will not go even lower than its current price, but there are some other trends which have to be considered in order to talk about it. For instance, trader Jonny Moe has called out the attention of the people in the industry by saying that BTC could go to the $3,200 USD price range, which is considerably lower than now.

Moe cites early 2018 as a case of when Bitcoin failed to break out of an inverse head and shoulders pattern. This made the prices go even down as traders got tired of the bear. If this actually happened, going below $3,000 USD would be expected, unfortunately.

Following this historical trend instead of the other one would make prices fall during the year. Another internet trader with thousands of followers, “Moon Overlord”, has agreed that the prices may go down.

In the long-term, though, bets are on the side of Rhythm Trader. The trends that the bear market analysts are following are all for the short-term while he is following cyclic trends which are much larger, so the prices are still probably going up in 2021 in any case.