The Advertising Standards Authority (ASA), the self-regulatory organization of the advertising industry in the UK, upholds complaints against the derivatives exchange BitMEX for Bitcoin promotion.

ASA received four complaints accusing BitMEX ad of exaggerating the return on the investment while two of the complainants believe the ad “failed to illustrate the risk of the investment,” and challenged whether it was misleading.

The ad in question here is the one produced by crypto derivatives exchange BitMEX on January 3, 2019, the 10th anniversary of the mining of the initial block.

The ad titled “Two sides of the coin: the bifurcated near-future of money” appeared on the front page of a national newspaper with a graph and text written by the CEO of exchange Arthur Hayes. 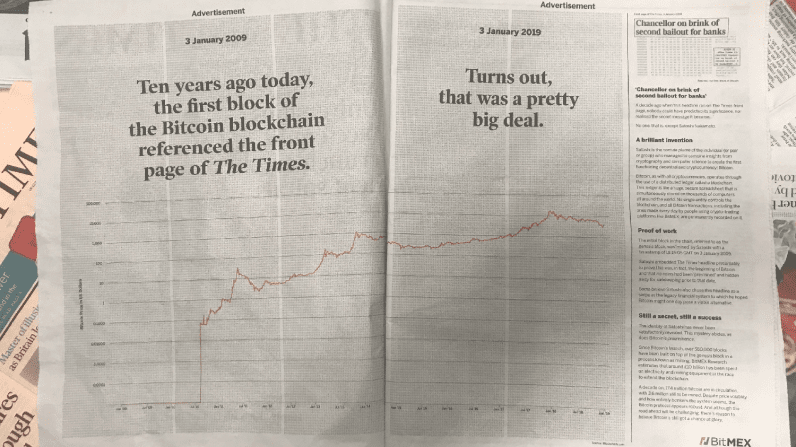 The ad showed a graph depicting the Bitcoin value against the US dollar since January 2009 on a logarithmic scale which ASA says, “meant that the y-axis of the graph increased incrementally by the power of ten.”

Moreover, readers are likely to interpret the graph line to mean there has been a “sharp then steady” rise in the value of Bitcoin.

But given the fact that BTC's value “fluctuated dramatically” in recent years, ASA

“considered that readers of the ad were likely to be misled about bitcoin’s value and stability in recent years and therefore about what any investments they might previously have made would have yielded.”

Clear Promotion with Failure to Warn of Risks

The text alongside the graph read,

“Despite price volatility and how entirely bonkers the system seems, the Bitcoin protocol appears robust. And although the road ahead will be challenging, there's a reason to believe Bitcoin's still got a chance at glory.”

This ASA says is why this is a “clear” promotional content with “very little” to warn consumers of any risks.

The ad had misleadingly exaggerated the return on investment (ROI) and failed to illustrate the risk of the investment, as such is concluded by ASA that it was in breach of the Code.

Due to being guilty of misleading advertising and exaggeration the ad won’t appear in its current form.