Blockchain technology has been implemented in multiple supply chains in multiple industries, allowing consumers to check data for authenticity, value, origins, and more.

The art industry has a great need for these types of details to be recorded, leading them to determine that the distributed ledger technology might benefit their needs.

According to reports from The Next Web, a merger was formed between an art registry on the blockchain and a database for international auction house sales.

The merger includes over 4,000 auction houses, which can now be found on the blockchain. The registry, Artory, purchased the privatized database known as Auction Club. Reports from the Art Newspaper indicate that there’s 4,000 international auction house sales, and the acquisition immediately merges the companies.

The sales records of Action Club will be available publicly, involving over 250 businesses in 40 countries. The records are expected to be made available in May this year.

All of the information recorded goes back to the 1970s, which includes information that was already digitized over the last four decades. While advertised as public, users that want to see the database will need to register with Artory and vetted by them as well. The blockchain will be called The Registry.

The life cycle of the art will be recorded with information about when it went under auction, how much it was sold for, when it was sold, and what the art item is. However, the details of art owners are omitted, likely to keep the privacy of these buyers. The buyers will have to supply a secure digital record of the artwork, and digital certificates can be published with each said.

The Next Web points out that one major concern is the Artory Registration card. This card holds tons of sensitive details, like the seed phrase and a private key that anyone can see by just looking at the card. The official website for the card provided the following image to demonstrate the appearance of the card. 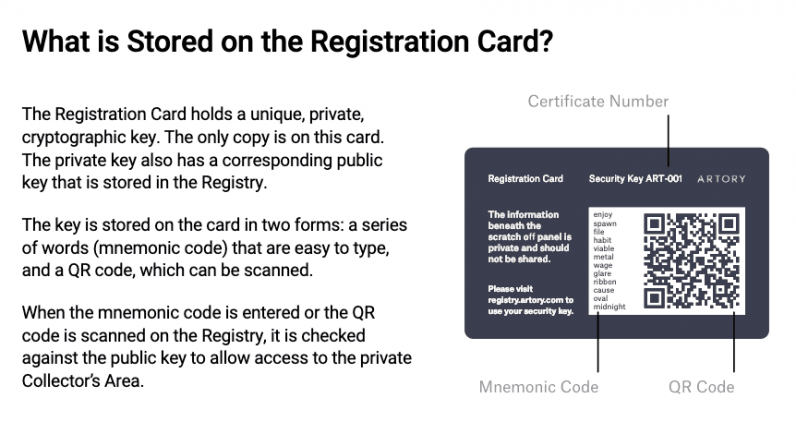 In the event that this registration card is stolen, bad actors could easily edit the information on The Registry. To learn more about this potential for fraud, The Next Web has already contacted Artory to learn about their security measures to prevent these problems from happening.

Christie’s, a major auction house, had a milestone moment when they used Artory’s blockchain to track $317.8 million in art auctions.