Blockchain Technology Could Be the Solution to Facebook’s Data Woes

Over the past day, there have been several reports talking about ‘FBCoin’.

‘FBCoin’ is the nickname that has been given to Facebook’s alleged impending cryptocurrency launch.

The report was broken by New York Times writer, Nathaniel Popper in a series of tweets on April 8th, 2019:

Update on Facebook's cryptocurrency: Sources tell me that Facebook is now looking to get VC firms to invest in the Facebook cryptocurrency project we reported on earlier this year. I hear they are targeting big sums — as much as $1b.

Given that one of the big allures of blockchain projects is the decentralization, getting outside investors could help Facebook present the project as more decentralized and less controlled by Facebook.

One person I spoke with said that Facebook is talking about using the money as collateral for its cryptocurrency. Facebook has been designing the coin to keep a stable value, pegged to a basket of foreign currencies held in bank accounts.

It's interesting to think of one of the richest companies on earth raising money. When was the last time they did outside fundraising?

We’re going to cover all aspects of what Nathaniel Popper tweeted about below as well as some flaws in the general narrative concerning ‘FBCoin' (as it has been affectionately termed by the crypto community).

Obviously, the most notable takeaway from Nathaniel’s series of tweets is the idea that Facebook is seriously going forward with a cryptocurrency. Obviously, this would be the biggest name that has entered into this space in a direct and substantive manner (yes, that includes IBM).

But the question remains — ‘Why would Facebook enter into the remittance markets when they have absolutely zero experience with remittance payments?’

This is an issue that the publication, ‘TechCrunch’, addressed in a thorough and critical manner a little under a month ago.

Specifically, the following excerpt from the ‘TechCrunch’ piece call the idea of a Facebook-backed cryptocurrency that would be used specifically for remittance payments, into question: 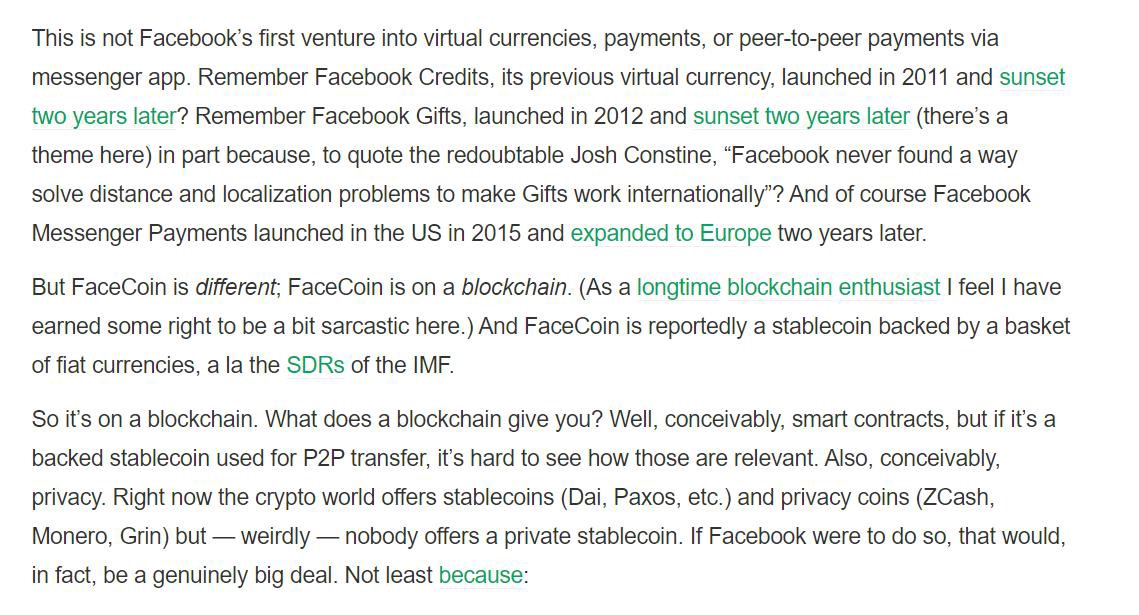 In the above screenshot, TechCrunch makes the apt observation that Facebook has already issued a ‘digital currency’ in the past, called ‘FacebookCredits’.

According to Wikipedia (reliable in this instance; times have changed!):

What’s notable are the similarities between what is written in the passage above and the fate that Nathaniel Popper described for Facebook in his tweet thread.

Specifically, when Nathaniel Popper stated this:

Given that one of the big allures of blockchain projects is the decentralization, getting outside investors could help Facebook present the project as more decentralized and less controlled by Facebook.

‘FacebookCredits’ existence on Facebook’s site did not last for long, however, with Facebook announcing that it would be discontinuing ‘FacebookCredits’ in 2012/2013, a little over a year after its initial launch.

As mentioned in the Techcrunch piece, a similar fate befell ‘Facebook Gifts’ (another virtual currency based idea from Facebook) too.

Thus, we must ask ourselves, ‘Why would Facebook launch a digital currency of their own?’.

Below, we can see a speculative argument made by Techcrunch in the piece we cited from above:

The author is inclined to disagree with this narrative. Instead, it might be more beneficial for users in the community to consider broader possibilities as it relates to potential use cases for a cryptocurrency from Facebook.

Facebook’s Data is Worth a Lot

When you hear the phrase ‘blockchain use cases’, what are some of the more classic examples that come to mind?

Many will probably state something related to ‘remittance payments’ (this is the obvious potential use case). However, another major use case for blockchain is data preservation, sharing, and access.

Specifically, many have listed healthcare as an entity that would benefit greatly from the data sharing/storage capabilities of blockchain:

How blockchain could reshape the healthcare industry in 2019

Here’s an excerpt from the article:

Note how the excerpt above mentions three important facets of data integrity that blockchain can assist within the healthcare field:

These are three facets of blockchain technology that would greatly benefit Facebook.

Data Management/Preservation Has Been the Bane of Facebook’s Existence

Below are some recent headlines that have come out about Facebook:

The above headlines are just a microcosm of the general native on Facebook over the past few months.

Essentially, data management has been the bane of Facebook’s existence. Which begs the question of why the greater cryptocurrency space has not even pondered the possibility that Facebook may be exploring using blockchain as a solution to their data problems.

This is relevant specifically because a substantial reason for why Facebook is able to amass so much revenue through their advertising is due to the fact that they have an enormous pool of (probably accurate) data on their users.

In order to understand why this is, we must consider what Facebook is and how it is used by individuals.

Facebook is perhaps the only and largest aggregate of such accurate and personally identifying information. Even Google’s store of data on its users pales in comparison to the level of specificity and individualism in the data that Facebook is able to provide to its advertisers.

This, in combination with Facebook’s ‘targeted advertising’ options for entities (and companies), has allowed becoming a giant in the advertising space.

Unfortunately for Facebook, its legal issues and PR crises have not been limited to their data preservation and usage methods — their platform’s advertising practices have come under immense scrutiny as well.

Recently, ‘The Washington Post’ posted a piece that dissected the issues with Facebook’s “targeted advertising”, namely singling them out for discriminatory practices in the display of advertisements by the company.

Unfortunately (again) for Facebook, the bad news wasn’t limited to negative press. They are also facing a hefty lawsuit by users that claim they have been adversely impacted by Facebook’s discriminatory advertising practices:

Any casual observer of Facebook and events related to the company over the last few months can tell that Facebook is currently in the midst of repairing its public image, revamping their websites’ algorithms, and pursuing greater strategies to ensure data security/preservation whilst dodging lawsuits, indictments and Congressional subpoenas launched straight at the owner himself, Mark Zuckerberg.

Even if one has been blind to the events surrounding Facebook over the past few months, Facebook’s recent public campaigns have conveyed the same sense of public penance that we often see from companies that have been ‘caught’ in a PR scandal.

Below is an example:

Obviously, it only takes one look at recent headlines to come to the conclusion that Facebook has been vastly unsuccessful thus far in their PR campaign as they are still under immense scrutiny from the public.

To make matters worse, a recent report (published in 2019) by Digital Marketing firm, ‘Smart Insights’, shows that Facebook usage among the younger demographic has decreased substantially:

“ A new 2019 Children and parents: media use and attitudes report also published by OfCom (UK) is interesting if your business is involved in marketing to children or youth markets or you want to understand future adult use of social media. It highlights the continuing decline of Facebook use by younger demographics with 12–15 year olds with a Facebook profile decreasing from 40% in in 2017 to 31% in 2018. Instagram increased from 14% to 23% in the same period with Snapchat fixed at 31%.”

The 9% drop off in usage by 12–15-year-olds from 2017 to 2018 is a substantial decrease and could precipitate a greater exodus from the platform from the younger demographic.

This is important to note because, as many know, Facebook gained popularity through its widespread usage and adoption by younger demographics (ages 11–25). Thus, a major exodus of this core demographic could signal impending death for the platform in the next few years (or perhaps even sooner).

Given all of this inner turmoil and external scrutiny on top of the ongoing PR scandal Facebook (and Zuckerberg) have been dealing with for the past year, its hard to imagine that Facebook is now planning to redirect and divert their resources toward entering into an entirely different market that they have a proven history of failure in. ]

However, it is plausible to suggest that perhaps Facebook is looking to blockchain to conquer its data integrity issues.

Only time will tell what direction that Facebook goes toward in the long-term.