Tron is experiencing a vast amount of development in its ecosystem and this week represented yet another successful story to the growth of the 10th largest altcoin. Tron Foundation’s CEO, Justin Sun, is preparing for the charity lunch with Warren Buffet in a week’s time, the development team at Tron is making it easier to purchase and own TRX through Carbon, TRON blockchain sees a steady increase in number of dApps and much more in our weekly Tron roundup.

TRX is currently on a massive bullish momentum as the price of TRX boosted past the $0.025 USD mark, registering an 11% increase in the past 24 hours. The announcement of a payment gateway with Carbon and the upcoming lunch with Warren Buffet presents strong factors pushing the coin to greater heights.

In an announcement on Friday, TRON confirmed that they had reached an agreement with Carbon, a fiat payment gateway, to allow users to purchase TRC-20 tokens using their credit cards. The New York based company integrates TRX into its system allowing direct purchases of TRX, the Bit Torrent token (BTT) and Tron stablecoin through its Fiber on ramp product. 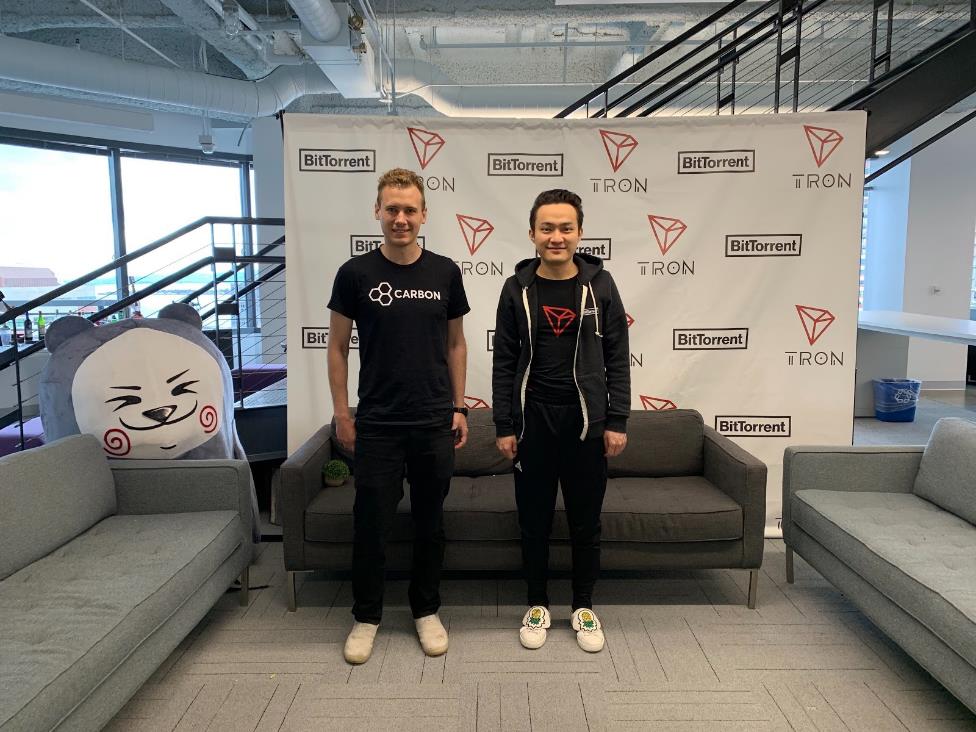 The Fiber product will only be available to customers outside the US operating in over 120 countries and over 180 currencies will be acceptable on the platform. Despite already having the debit/credit card pay feature and Apple Pay, the company is aiming to add various options of purchase including WeChat Pay, AliPay, SEPA, and wire transfers.

Speaking on the addition of TRC-20 tokens on the platform, Justin Sun said,

“We're always looking for simplicity and ease of use for the TRON community, and these types of collaborations are extremely important to bringing buyers and sellers together in our growing dApp ecosystem.”

The CEO and co-founder of Carbon, Sam Trautwein, further remarks that his company envisions giving cryptocurrency investors a one stop shop to purchase these digital assets. He says,

“Fiber replaces the complicated and tedious process that has hampered crypto's usability and approachability.”

As partnerships grow, TRON blockchain is also experiencing substantial growth in the number of decentralized apps on the platform. The blockchain has welcomed more dApps to its network since last week on Sunday to a total 530 dApps as recorded on dApp Review. Justin is always on hand to pass such information to the Tronics community as he wrote on Twitter this Friday,

“According to DApp Review, 8 new #DApps were added and the total number of #DApps in the #TRON ecosystem is now 521. According to @dapptotal1, the DAU, transaction number, and transaction volume increased greatly this week. #TRX $TRX” While the transaction volume on dApps has been Tron’s strongest point, beating Ethereum and Eos, this week saw the tables turned as ETH recorded $87 million USD in the past 7 days to TRON’s $84 million USD. Eos lagged behind its two competitors with $60 million worth of transactions completed on the dApps.

While the Tronics community counts down to the highly publicized charity lunch with Warren Buffet on Thursday next week, all eyes will be watching to see what this brings in for TRON’s ecosystem. Carbon’s Fiber product is set to integrate Tronlink for even faster services in the coming weeks and this too will be a keen story for Tronics to follow. Roll on TRON!