Cryptocurrency mining activities have been growing all over the world during the last years. China has became one of the main hubs for virtual currency operations in the world. But due to heavy floods in the Sichuan province, a major cryptocurrency mining operation has been heavily damaged by the water. The information has been reported by Golden Finance on June the 30th.

The English outlet of the China News Service (CNS) – known as Encs – Sichuan and other four provinces experienced heavy rains between June the 27th and the 28th. This caused several floods that damaged and hit the Sichuan province. 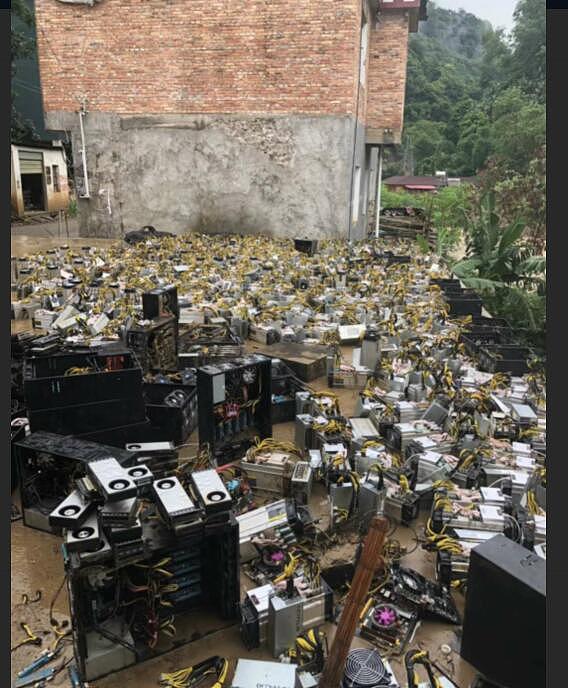 According to Golden Finance, a major bitcoin mining operation has been damaged, leading to a loss of ‘tens of thousands’ of mining devices which are quite expensive to buy for smaller retailers. And as the site explains, the miners seem almost impossible to repair.

There is no information about which virtual currencies were mined with these devices, how many miners were affected or how big the mining farm was.

Cryptocurrency miners work by processing the transactions of the network. Every time a miner finds a block, then it receives a reward in coins according to the network that they are working in. Some reports say that Bitcoin may consume 0,5% of the total energy of the world by the end of 2018.

China is an important mining hub all over the world. Indeed, some experts believe that 70% of the mining power comes from the Asian country. And Sichuan specifically, is known as the Bitcoin mining capital because of the high concentration of mining operations in it. The country and region have cheap electricity compared to other countries and low temperatures to keep the devices working properly. Different news outlets said that a drop in the Bitcoin hashrate has been caused by the floods in the region. But according to data from Blockchain.com, the hashrate did not decrease but instead it registered a slightly increase from June the 27th to June the 28th. That may be related to the fact that the flood did not affect the entire network.

One of the most powerful miners in the market, the Antminer E3 produced by Bitmain can be bought for $1876 dollars. At the same time, the Antminer Z9 mini costs $850 dollars. At the same time, companies like Nvida and AMD have experienced an increased demand at the end of the last year and the beginning of this one. But during the last months, and due to the bear market, the companies may not see as good results as in the past.