One of the leader's in cryptocurrency and blockchain reporting is CoinDesk and they recently released a 55 page “State of Blockchain Q1 2018” report that summarizes key trends, data and events happening in and around the space the first 3 months of this year.

Here are a few of the highlights of the executive summary and industry overview:

Headquartered in Midtown Manhattan, New York City and currently doing over 5,000,000 million monthly unique visitors to their website – CoinDesk – fresh out of their 8,500 person Consensus 2018 event – has compiled quite a nice list of data as it is great to put some real math and stats behind such a growing industry and booming future.

Here is the layout and everything we will cover in this monster review of CoinDesk's State of the Blockchain reporting.

During this time, Bitcoin experienced different situations all over the world and related to different topics. Here is a brief listing as well as BitcoinExchangeGuide.com coverage of each major benchmark.

During this period of time, Bitcoin price decreased from $18,000 dollars in January, to $8,000 dollars at the end of March. At the same time, the transaction volume decreased, as well as the volume in different crypto exchanges. The transaction count has also been reduced from January to March, but it shows a recovery from February. But Bitcoin was not the only virtual currency that experienced loses during the first part of this year. Bitcoin Cash, Litecoin, Ethereum and Ripple show very similar trends and volumes.

An interesting point that we can mark is that the bear market in virtual currencies during the beginning of the year, has also been related to a decreased interest from individuals for blockchain and crypto related topics in google searches.

As shown by Coindesk, there has been a downtrend in searches for the terms Bitcoin, Ethereum, Blockchain, Cryptocurrency and ICO. The most important virtual currencies in the market, Litecoin, Ethereum, Bitcoin, Ripple and Bitcoin Cash, have all suffered losses of around 50% in this first quarter. Ethereum lost 48%, Litecoin 49%, Bitcoin 51%, Bitcoin Cash 72%, and Ripple 78%.

Due to the fact that the number of transactions decreased, as well as the interest in virtual currencies, the fees of all the virtual currencies analyzed here have also shown substantial reductions. Bitcoin experienced a 97% reduction in fees, while Ripple 64%.

Most of Bitcoin trading volume has been registered in Bitfinex, accounting for 52% of it.

Coindesk also shows that the US Dollar is not the most used virtual currency to transact for Bitcoin, indeed, it lost over 40% of its market to other currencies including JPY, EUR, USDT, and others. Bitcoin dominance has also changed. At the beginning of the year Bitcoin accounted for 37% of the market and at the end of March the famous virtual currency accounted for 47% of it. It would also be important how the trend will continue in the following months.

Coindesk is also making an interesting point. The Bitcoin network is much more secure than before due to an increase of the hashrate, but the price is less than half what it was at the beginning of the year. The global mining cost vary depending the country. The cheapest country to mine 1 BTC is Trinidad and Tobago, and the most expensive place where to mine 1 BTC is South Korea. In the first country mentioned, the cost to produce one bitcoin is less than $1,500 dollars, while in South Korea it us higher than $25,000 dollars.

Why the Bear Market?

According to CoinDesk, the bear market has not been caused by taxes.

“The estimated taxes owed are less than a 30% of the total loss in market cap. If taxes were the main cause of declines, there should be more parity. This estimate also doesn’t consider those with no taxable sale events or non-reporters.”

What CoinDesk shows is that the on-chain transaction volume has been declining over time. Something that could be related to the price of the cryptocurrencies analyzed.

CoinDesk explains that merchant acceptance remains tepid until now. During this year, BitPay says that ‘small merchants dropped off but mid-large ones grew.’ 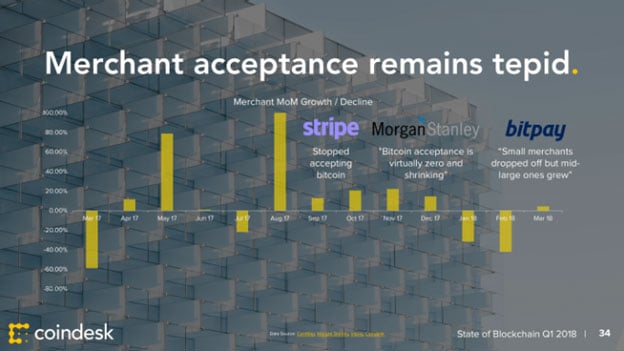 According to the Federal Reserve of San Francisco, there has been an important downward pressure on prices because of the introduction of bitcoin futures.

“With the introduction of bitcoin futures, pessimists could bet on a bitcoin price decline, buying and selling contracts with a lower delivery price in the future than the spot price. […] With offers of future bitcoin deliveries at a lower price coming through, the order flow necessarily put downward pressure on the spot price as well.”

When 2017, was a record year for ICOs, it seems that 2018 will also be record. During the first quarter, ICO funding reaches $6.3 billion dollars, compared to over $5 billion dollars in 2017. The number of monthly ICOs has declined from December 2017, and January 2018, until March 2018, but the money raised has been increasing months after months, and stabilized in March.

Moreover, the average funding per ICO shows an increased compared to the last two quarters. In addition to the increased number of funds used to fund ICOs, VC funding reaches $3 billions, and during the first quarter $885 million dollars have been used to fund 146 ICOs. But most of the companies prefer to receive funds from performing an ICO, rather than traditional VC funding.

There are different companies providing blockchain services and products and working together. We can mention the Enterprise Ethereum Alliance, the R3 Consortium, Hyperledger, Ripple, IBM, and Microsoft to name a few.

Several countries around the world have already regulated virtual currencies. North America has legalized them, most of the countries in Europe have also legalized virtual currencies, and in Asia there are some nations that have restricted the use of cryptocurrencies or consider them illegal. Countries were digital assets are unregulated are Argentina, Peru, Colombia, Venezuela and Kazakhstan. There have been some litigation cases around the world, where different courts had to intervene. We can mention Kleiman vs. Wright, CFTC vs. Monex, IRS vs. Coinbase, R3 vs. Ripple, or CFTC vs. McDonnell.

According to CoinDesk and a survey conducted by them, the community is conformed by:

55 percent of the respondents said that they became active in the cryptocurrency market in 2017, while 10% did it in 2018. The numbers are significantly reduced in past years.

Most of the individuals that answered the interview answered that check cryptocurrency prices at least once per day – 59%. 28% of the respondents said that they check the prices every single hour, 11% a couple times a week, and less than 2% a couple times a months or hardly ever.

18% answered that they did buy cryptocurrencies using credits or on margin during 2017. Of this 18%, 42% did not pay the debt until the time of the survey. More than 80% of the respondents said that they believe that the prices declined during this first quarter because of rebound from prior over-speculation. 62% answered that the dip occurred because of current regulations, and 50% said that it happened because of taxes.

But if prices went down, it could be a good moment to start to learn about other technical aspects about cryptocurrencies or blockchain technology.

86% of the respondents said that they feel positive about the current overall state of Bitcoin, while just 8% had a negative feel about bitcoin. 8% felt neutral or ok.

Bitcoin users and crypto enthusiasts believe that one of the most important aspects of Bitcoin is the fact that it’s a hedge against central bank monetary policy. 56% of the respondents put it in the first two places of importance.

About the negative aspects of Bitcoin, there is no consensus among the community, the results have been very similar.

For the initial coin offering community, here is what they found: It is surprising to see that 43% of those who invest in ICOs are still holding their coins. It means that there is an important part of the market that uses them, is waiting for higher prices, or believe in the projects they’ve invested in.

82% of the crypto community believes that the Venezuelan Petro is a perfect example of a shitcoin. 47% believe that this is because is a centrally controlled wallet with 100m Petros that pretended to be an ICO.

Decentralized exchanges are one of the blockchain applications that people are most bullish on:

At the beginning of the year, the most important social networks, including Facebook and Twitter, decided to ban crypto-related ads. 30% of the respondents agree or strongly agree that the ban is justified, while 47% thinks that there is no justification for this. Moreover, 55% think that the ban will slow down ICO raises.

Another topic that has been discussed and taken in a very bullish way, is what Jack Dorsey, CEO of Twitter and Square said: ‘bitcoin will be the world’s sole currency within 10 years.’

66% does not agree with him, and only 17% think that that’s possible. 17% remains indifferent.

Almost 70% of the respondents did not pay taxes related to virtual currencies, and 82% of US citizens did not understand how to fill their tax liability.

The most used exchanges are: 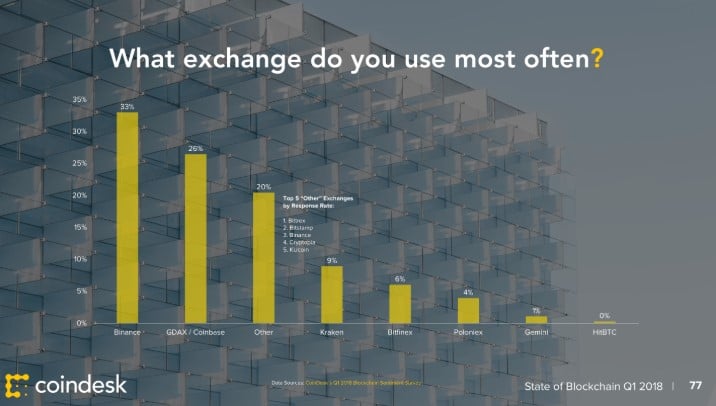 Apparently, 82% of the respondents agree or strongly agree that merchant adoption will increase during 2018. 5% disagree with that or strongly disagree. The rest neither disagree nor disagree.

60% of cryptocurrency holders said that they would never stop holding their assets even if the prices drops ‘1000%.’ And 86% did not sell during the last bear market. Only 22% answered that bought because of price dips.

Almost 80% of those who answered the survey said that agree or strongly agree that the roll out of the lightning network is a positive development for the crypto community. 18% said that they do not agree nor disagree and just 4% disagree or strongly disagree with it.

Here is what the State of Blockchain report had to say about Ethereum (ETH) and ether: Furthermore, 40% of those who answered the survey believe that alternative smart contract platforms like EOS pose an existential threat to Ethereum. 31% disagree with it.

What do you guys think of CoinDesk's State of the Blockchain report?

It is always great to see such a survey and statistical accumlation of relevant and meaningful data! Kudos to CoinDesk and the entire blockchain, cryptocurrency and bitcoin industry for growing despite all odds.

Visit our homepage for more daily news and innovation advancements in the industry! Also below are 2 more survey style reports worth looking into!

New Study Shows 1 in 10 Americans Now Own Some Cryptocurrency