Stocks ended a black day with a bitter note on Friday after a report that trade talks between the United States and China had stalled.

The failure of the talks is the result of the two parties being unable to agree on what to negotiate, which creates uncertainty when the next round of negotiations will take place, CNBC reported.

As a result of this failure, markets fell, even more, today than they did during the week, aggravating the situation of the main stock markets and indexes of the financial world. Stocks had recovered earlier on the day after the University of Michigan consumer confidence index soared to a 15-year high, surpassing analysts' expectations.

In addition, the trade agreement for steel and aluminum tariffs between Canada, Mexico, and the United States succeeded in eliminating an additional point so that the DOW did not have more weight in its fall. Within Nasdaq, Apple dropped slightly to $ 189 when Nomura analysts cut their price target below the market price due to concerns over trade tensions between the United States and China.

The rest of the world closed negative for fear of an ongoing trade war that could generate more sanctions, contraction of the world's most important economies and tensions among investors. The energy market is also feeling the boomerang effects of the commercial tension between the two main economies and the Brent oil, of reference in Europe, contracted -0.70%, to decrease to 72.21 dollars per barrel. 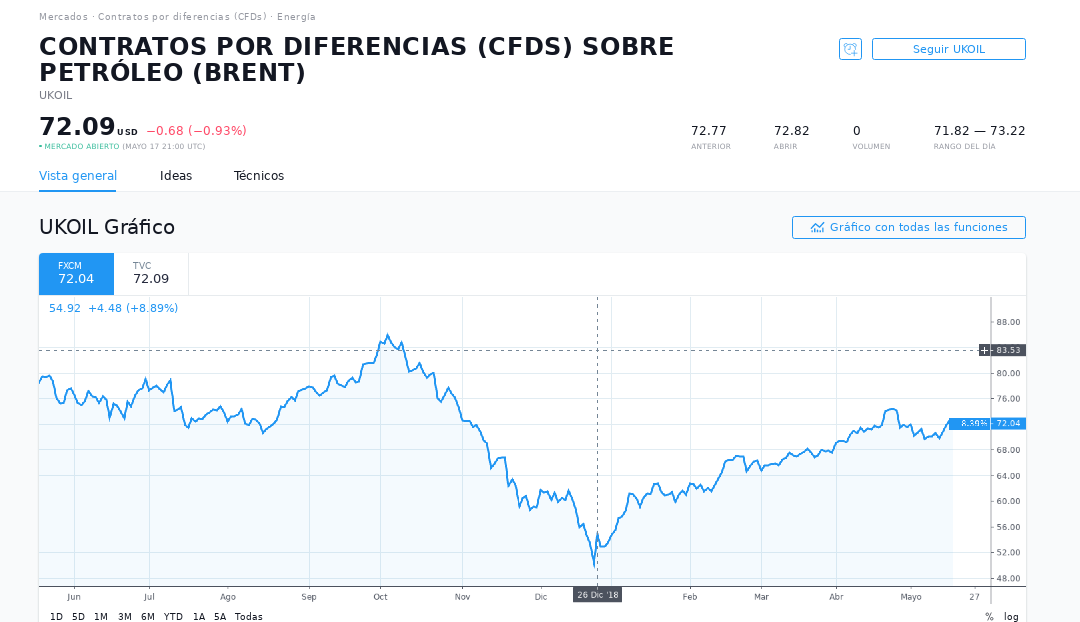 Brent closed a week marked by the escalation of tension between the United States and Iran, with an advance of 1.71% compared to the opening on Monday.

Similar behavior was seen in Texas crude, WTI, down -0.2% to close at $ 62.76 a barrel in the middle of a moment of instability in the Middle East and the Strait of Hormuz that helped it reflect a balance weekly positive of up to + 1.8% due to fears of a lower crude supply in the area. Gold for its part falls into a tailspin and jeopardizes its critical support in the area of $ 1275, pressed by some positive news in the international trade that forced a decline in demand for a decrease in the concern of investors. The day closed it losing almost nine dollars, to quote the troy ounce at 1277.35 dollars.

However, the possibility that the FED begins to cut its interest rate at the end of the year and the China-US trade war. They are creating a bullish scenario for the precious metal in the medium-long term.

Finally, the crypto market has once again experienced moments of instability and the volatility of its protagonists has jumped back into the fray.

Bitcoin, the main reference has decreased at the time of writing just over 400 points, for a contraction of -5.96% and quote at 7255 dollars the BTCUSD pair. The filtering of documents where large banks such as JP Morgan are indicated in the speculation of the price of the BTC by injecting more than $ 1 billion dollars to create opportune moments of purchase and sale of the crypto space, has generated an imperative fall after a sale order issued in Bistamp for $ 5000 that generated an effect of free fall in the ecosystem.