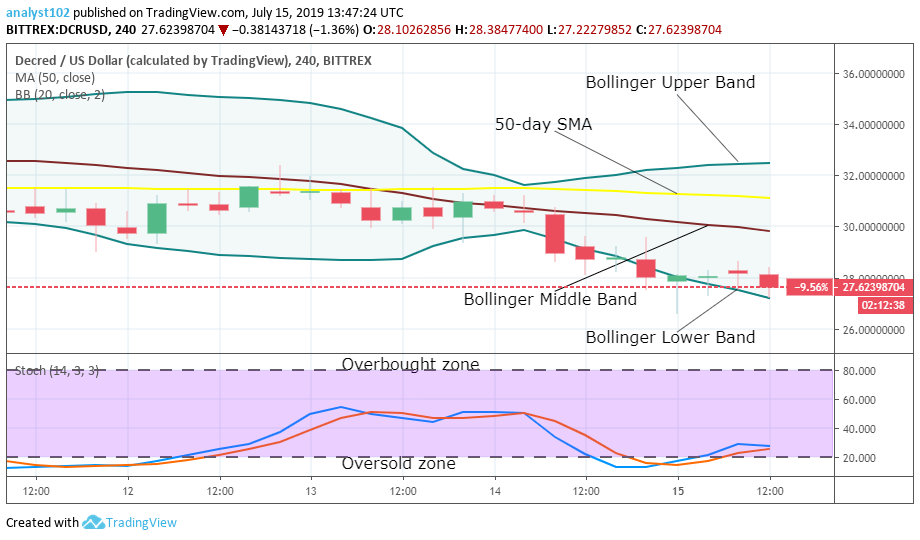 Decred market worth has some extent succumbed to pressure by the US dollar price valuation. The crypto-market in its latest trading sessions saw tangible ranging moves around $32 and $30 lines between July 11 and some parts of the 14th day of trading. Price has been trading around a low point at $28 mark.

The Bollinger Middle Band is now situated at $30 point underneath the 50-day SMA indicator. The Stochastic Oscillators have dipped into the oversold zone to seemingly begin a consolidation move around range 20.

The slight selling pressure exerted on the cryptocurrency seems not to be weak in no time. Therefore, there are yet the possibilities of seeing this market being pushed southward further by the bears. The DCR/USD in the short-term run has been witnessing a series of choppy price movements around $28 and $27 lines today. Yesterday’s market trend was dominated by USD. As at now, price has been fluctuating around the Bollinger Middle Band trend-line slightly pointing to the south. The Bollinger Upper Band and the 50-day SMA have joined together a bit over $29 mark. And, they also point a bit to the south. The Stochastic Oscillators now slantingly head northward to point north-east below range 60.

The market’s downward move may resume between the space found in the Bollinger Middle Band and the above conjoint indicators around $29 and $28 price lines. Currently, the market has seen a now low value ever achieved at $27 mark.