Currently in the green by 1.07%, Ethereum is trading at $224, up 80% YTD. ETH traders meanwhile are expecting more gains with ETHUSD longs on Bitfinex still near all-time highs.

This growth has the USD balance of ETH on the crypto exchange nearly doubling this year which is in exact opposite trend with the Bitfinex’s bitcoin balance which saw the biggest outlaw among all the exchanges.

So @bitfinex now holds nearly double the USD balance of $ETH vs. $BTC. Two completely opposite trends this year.

$1B of bitcoin outflow. pic.twitter.com/KdmAdByq0w

What’s bullish is the active addresses on Ethereum that are currently at a level that was last seen in June 2018. These addresses interacting with ETH have spiked to a two-year high of 486,000. 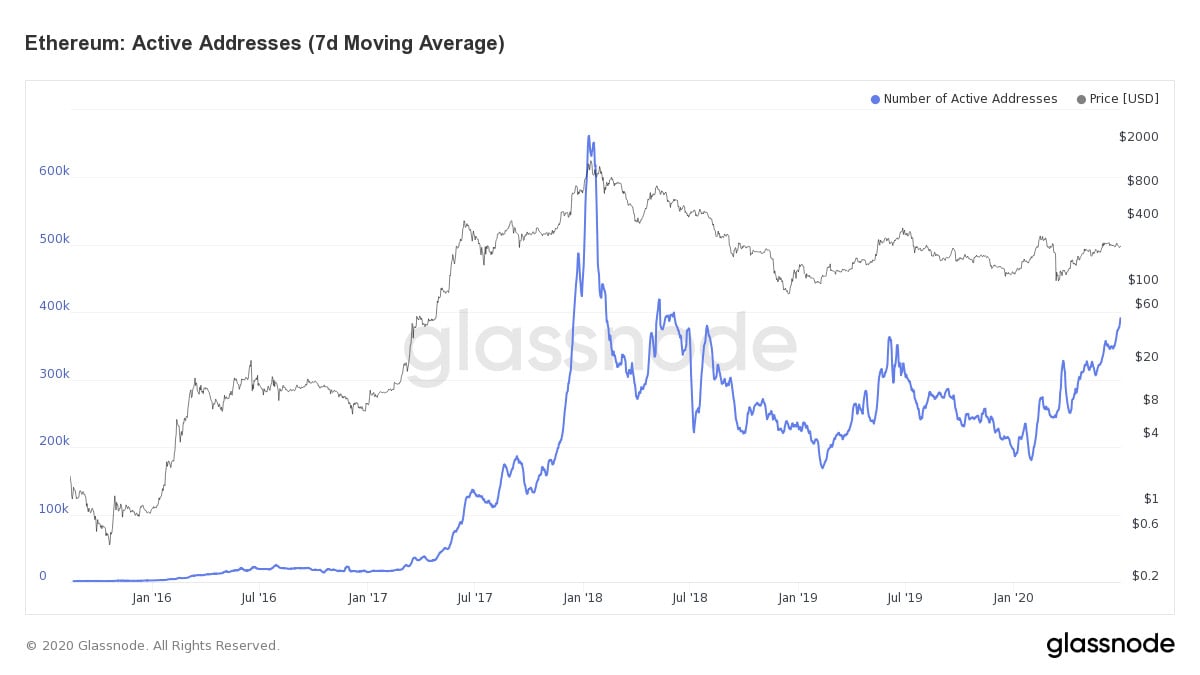 However, this indicator is also a cause of concern because “peaks of the daily active addresses line up with market tops.”

The network usage is already at new highs with the total ETH gas used on the Ethereum blockchain reaching a new all-time high. This surge is coinciding with the ETH miners voting to increase the block gas limit by 25%.

Although it will increase the network’s capacity to handle the transactions from 35 to 44, it will make it harder and costlier to sync a node. Also, it would increase the risk of DoS attacks.

As such, the median daily fee on the Ethereum network continues to go higher as the number of ERC-20 transactions pushes into an all-time high territory. Ethereum fees are also exceeding Bitcoin fees for the third time in a row.

Eth fees have been higher than the leading cryptocurrency network on more consecutive days now, which was last seen only once in May 2018. 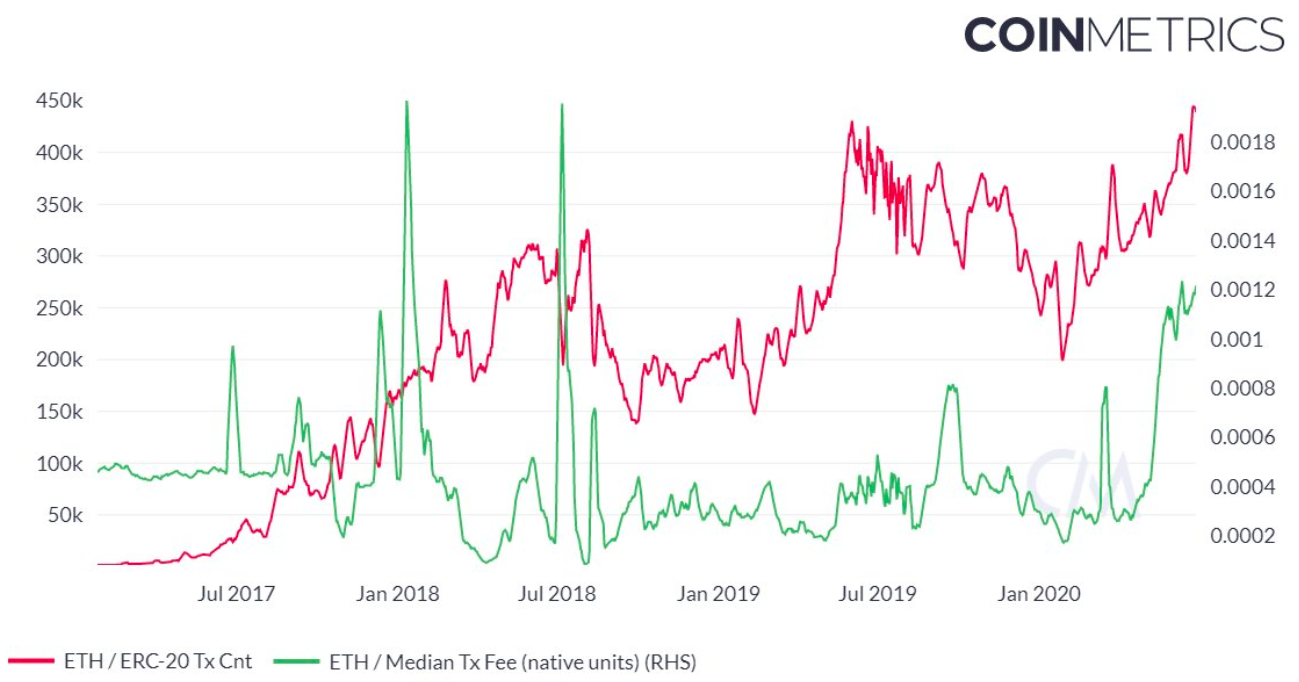 While major fiat-pegged digital assets have surpassed $11 billion, Tether (USDT) has pushed past $10 billion, as per Messari.

Similarly, the amount of ether collateral deposit in DeFi applications has also reached a recent high of 3 million ETH. This figure is shy of the all-time high of nearly 3.3 million deposits in DeFi earlier this year. DeFi tokens are currently the hot commodity in the market with on-chain liquidity protocol Kyber rallying today. The crypto jumped after an upgrade that includes changes to its KNC model to attract more participants to the protocol’s development.

Moreover, now more and more bitcoins are getting on the second-largest network. According to Dune Analytics, “over 11k BTC, which is over 0.05% of BTC supply, is now on Ethereum.”

“Assuming the “hype” is real and that this is another, much more extended growth cycle that the DeFi is about to undergo, the big question is where will the new capital come from,” wrote Denis Vinokourov of Beqaunt.

According to him, aside from collateralized loans and securitized Bitcoin currently in progress, another prime suspect for capital rotation is centralized exchange tokens, he said.

“With the IEO market in hiatus and spot market activity somewhat suppressed especially given the seasonal effects in play at the moment,” it may lead to at least 10% of capital out of CEX to DEXes.