The second-largest cryptocurrency is currently down 90 percent from its all-time high at around $1,400 in December 2017. Currently, it is trading at $147.98 with 24-hours gains of 1.75 percent while managing the daily trading volume of $3.56 billion, as per the data provided by Coinmarketcap.

Crypto Winter Has Taken Its Toll On Crypto Businesses

It's no hidden fact that the prolonged bear market has hit the cryptocurrency space hard as there have been multiple news of layoff and business shutdowns. In early January, this year, ShapeShift founder and CEO, Erik Voorhees revealed that they have to let go off of one-third of its team i.e 37 employees as he wrote in the post, “The latest crypto winter is upon us, and today ShapeShift felt the bitter frost.”

A number of other companies in this list that has felt the pain of the crypto winter have been Steemit that laid off 70% of its staff, lack of funding also caused one of the Ethereum Classic Development team to shut down its operations while Status cut off 25% of its staff.

“We are streamlining several parts of the business including Consensys Solutions, spokes, and hub services, leading to a 13% reduction of mesh members.”

Bitmain the bitcoin mining company is one of the latest examples that reported millions in losses with crypto prices one of the contributing factor. It also laid off its 23 employees and closed its blockchain development center in Israel.

As crypto business suffers losses, could it means the projects that hold Ether will have to succumb to selling their ETH holdings leading to more downturn for its price? In December last year when Ethereum prices fell down to a yearly low of $80, the Ethereum ICO treasury withdrawal also saw the highest of the year at 400k. 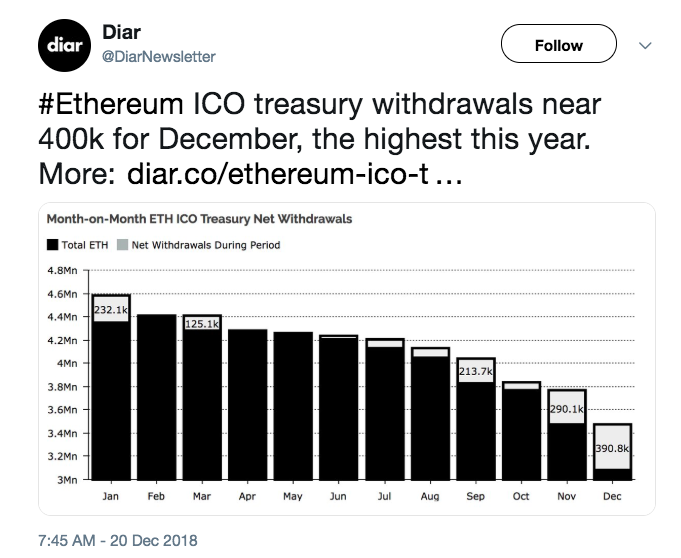 Is it a possibility yes, but of course there is no guarantee. Moreover, according to cryptoanalysts, the ongoing bear market is expected to bring more pain yet before the correction start in the second quarter of this year.

However, one option available to these projects is Dai CDP. In November, Aragon, a top Ether holder, moved about 40k into a Dai CDP (Collateral Debt Position) in order to protect its holdings from the increased volatility and secure its future.

Currently, 2,071,153.47 ETH are locked in collateral against $82,652,345.15 worth of Dai. For lending business, this bear market is rather a blessing as evident from the fact that Genesis Global Trading reported that its lending unit lent out digital assets of over $1.1 billion in 2018. So, these crypto projects that hold ETH do have an option available.

If we take a look at the current market condition, the ETH/USD longs are also making their way upwards. Moreover, it has its Constantinople hard fork coming on February 28. After seeing a good surge this week, the price might be able to see more action in the short time before it flies in tandem with Bitcoin in coming years, as has been projected.