The introduction of Futures Trading have changed the face of investing in Bitcoin – What's Been The Impact?

Bitcoin's value has changed dramatically from early 2017, going from a mere $1,000 all the way up to $19,800 price range. But what caused the spike from Thanksgiving timeframe of roughly $8,000 all the way up to $19,000 USD per coin in the following 3 weeks? Well, the Federal Reserve Bank of San Francisco (FRBSF) recently released a paper saying it's no coincidence with Bitcoin Futures Trading being involved, it had a direct influence on the price decline ever since.

Cryptocurrencies made a thunderous entrance in 2008, seeing it transition from theory to increasingly expensive investment opportunity. Between December 2017 and now, Bitcoin went from a nearly a $20,000 bull investment to a $6,500 bear market and had everyone again questioning the legitimacy of decentralized applications and blockchain assets.

One of the reasons for its exponential rise was due to the introduction of Bitcoin Futures on the Chicago Stock Exchange. According to CNBC, this news alone saw bitcoin jump by 19% before its subsequent crash.

Far from unexpected, the introduction of Futures coincides with a run-up and fall in whatever market it's brought in for. According to the research conducted by the Federal Reserve Bank of San Francisco, the activity of bitcoin has been shaped by futures but also reflects quite normal behavior concerning valuation.

In character, bitcoin demonstrates the same movements of bull to bear as the housing market of the early 2000's. The housing boom was due to the innovation surrounding securitisation and bond groupings that offered incentives for those uncertain of investing.

This boom was then replaced with an eventual bust due to the implementation of futures, and systems which allow investors to invest in the market. This dynamic is the same as the blockchain and cryptocurrency market, with futures allowing more reserved investors to buy into bitcoin without the volatility. 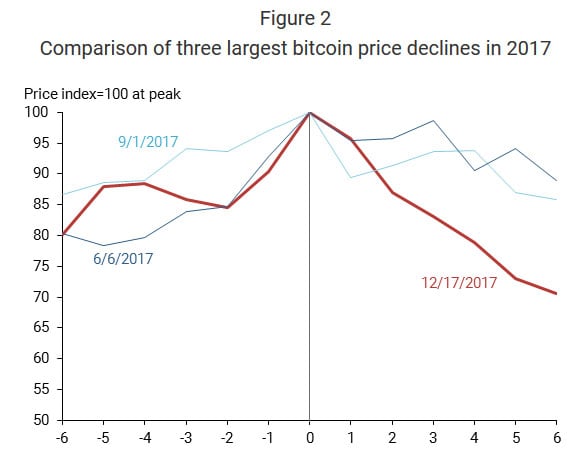 To understand the application of futures as an investment, and its significance for bitcoin. It's important to understand the difference between the types of demand that bitcoin is exposed to, both during and after 2017.

Which bitcoin has been continuously exposed to. This refers to its use in buying and selling on a daily basis and requires direct ownership to use bitcoin.

Acts as a bet on the price of the asset or currency and how much it will be worth. This doesn't require actual possession of the cryptocurrency, and just involves investment in tools that measure the assets movements. These are referred to as financial derivatives.

This speculative demand wasn't possible before the introduction of bitcoin futures in December 2017. Initially, the lack of these derivatives meant that trading on the potential value of bitcoin was impossible. And until the creation of futures, only optimists and active users could participate in investment, while more risk-averse investors had no way of gaining exposure.

This was the state of affairs until futures entered the picture, with pessimists able to bet against the continuing bullish trend. The ability for investors to be expanded to involve those that were more pragmatic, both expanded the buying population by six times, but led to the inclusion of investors buying with the prospect of selling at a lower price instead of higher.

This led to downward pressure on the market, resulting in a drop in price which resulted in a larger-scale price decline. The decline refers to the fall of bitcoin from $20,000 to $6,000 from late 2017 to now.

What Is The Foundational Value Of Bitcoin?

The supply of bitcoin is divided between those that are already in circulation and those that are being prospected and mined from blocks currently. Mining bitcoin depends wholly on the process being financially profitable relative to the fiscal demands placed on the individual.

According to Morgan Stanley, in for mining to be profitable, bitcoin would need to be valued at or above $8,600, but this is in fluctuation as its overall price changes. Which, if Silicon Valley has taught us anything, can be ‘extremely volatile'.

Bitcoins value lies in its transactional demand relative to the available supply both in circulation and under extraction. And as the supply diminishes as bitcoin runs its programmed course according to the bitcoin whitepaper, the overall value will increase.