The blockchain technology is not living up to it's big hype, at least according to Gartner’s Hype Cycle. A recent report made by The Next Web’s Hard Fork shows that the interest in the blockchain is decreasing and that many blockchain implementations are failing to live up to expectations. Because of this, investment is bound to decrease, too, unless some results are discovered.

The Hype Cycle is something created by Gartner, a graphical representation of how people get hyped about the new technology and then end up abandoning as they discover that the hype was too big. The company affirmed that the blockchain is “sliding into the trough of disillusionment”.

According to the company, most blockchain technologies are still from five to ten years away from having a real revolutionary impact in the world, but investors are often not that patient. They gave their money for development, now they want results. 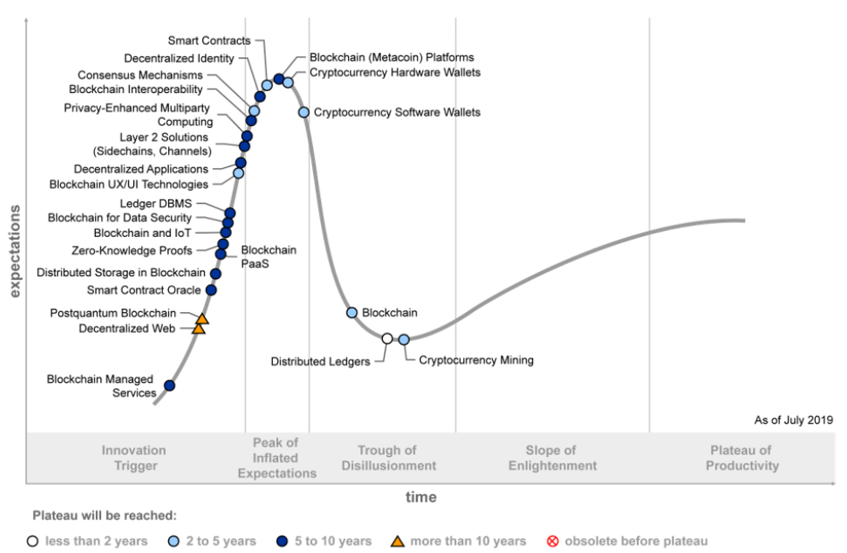 Avivah Litan, an analyst from Gartner, believed that the blockchain has not been able to achieve the expectations mostly because it is still stuck in experimental mode, which is still set to happen for a quite long time.

According to her, the technology will only mature by 2028, when it will be fully operational and able to properly scale up. Fortunately, not everything is pure bad news. Some platforms will be scalable and interoperable by 2023, which will start some progress in the area and finally lead us to Web 3.0. Here is her direct quotes on the matter.

“Blockchain technologies have not yet lived up to the hype and most enterprise blockchain projects are stuck in experimentation mode,”

Adding; “Blockchain is not yet enabling a digital business revolution across business ecosystems and may not until at least 2028, when Gartner expects blockchain to become fully scalable technically and operationally.”

And finally “We are witnessing many developments in blockchain technology that will change the current pattern. By 2023, blockchain platforms will be scalable, interoperable, and will support smart contract portability and cross-chain functionality. They will also support trusted private transactions with the data confidentiality required. Altogether, these technology advances will take us much closer to mainstream blockchain and the decentralized web, also known as Web 3.0″

Gartner has been looking at the blockchain for a long time now and it noted back in 2016 that the blockchain already was suffering from being overhyped. While it might be frustrating to have to wait for so many years, at least there is hope for the future.