It seems that Google’s AI recognized Bitcoin as ‘a collapsed economic bubble’ when users were searching for the term. According to Finance Magnates, when individuals searched for the Bitcoin term in Google, this was the first thing that appeared. However, the results have now changed and display the same answer but without the aforementioned phrase. 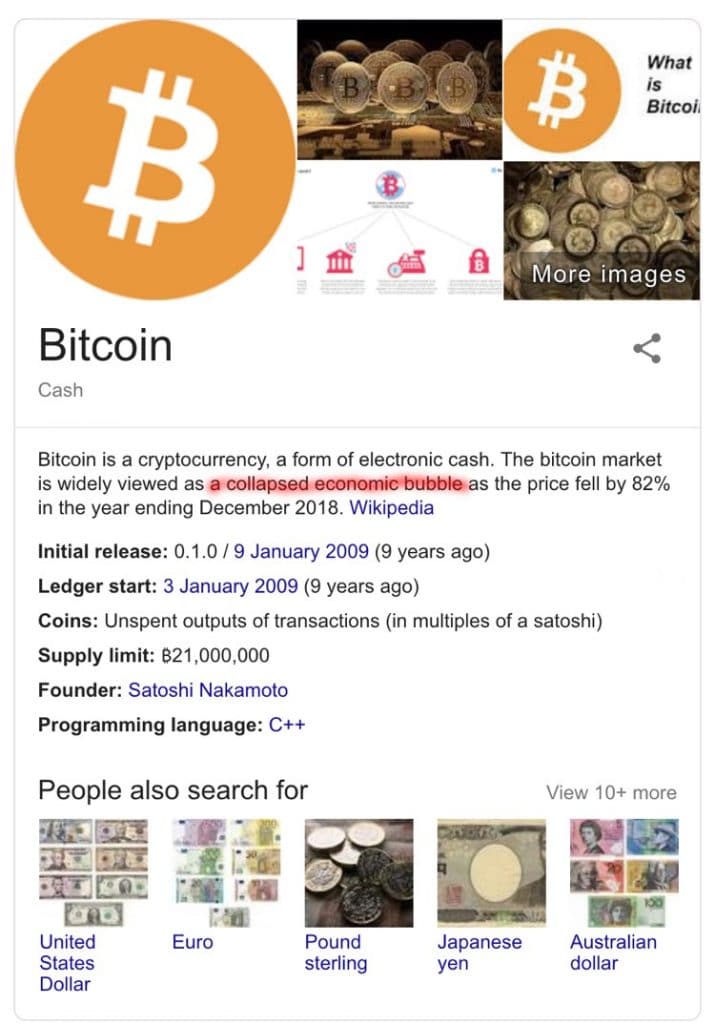 Google’s algorithm has been working in this way displaying wrong information to newcomers and people entering the space. With just a simple change in the text, the understanding of Bitcoin changes completely.

A few days ago, the CEO of Google, Sundar Pichai, testified at the US House of Representatives. He talked about Google’s AI and how it works. He has commented about the influence that the algorithm of the company had influence in the articles displayed about Obama care.

About it, he explained that the algorithm takes into account each keyword based on their relevance, freshness, popularity and more. This can be the reason why Bitcoin was displayed in such a way.

Since the beginning of the year, Bitcoin experienced a downtrend that affected the whole space. It is also possible to understand that there was a downgraded view towards Bitcoin with the current market. At the end of 2017, Bitcoin reached $20,000 and it lost around 82% of its value reaching $3,300.

This is not the first time that Bitcoin collapses in such a way. There were other drops in the past that affected the market in the same way or even worse. For example, when Mt. Gox was hacked, the prices of the popular virtual currency plummeted from $22 to $2 in just a few months.

During the last years, there was an increase in the number of new exchanges, media coverage and collapsing currencies in emerging countries. This has also created a growing interest in the popular virtual currency that reached its highest price ever in December 2017.