After seeing a constant drop from $20,000 peak to the yearly lowest in December at $3,200, 2019 turned out to be good for the leading cryptocurrency and the crypto market. From February onwards, we started slowly making an upward movement from $3,460 to $4,100.

Last week was when things changed dramatically as Bitcoin went straight through $5k. Though we saw a slight correction, we are in the green yet again at $5,253. BTC is looking to take a flight to $6 now.

Analysts and traders are expecting the leading cryptocurrency to make it to the $6k but once this level is broken, we can also see some red as trader @Sawcruhteez says,

$BTC forming an ascending triangle on the 4h. Target is $5,671 which is right in line with horizontal resistance. Stop market order entered to long at $5,186 with stop loss at $4,949. If target is reached I will be taking full profit and looking to go short. pic.twitter.com/ziW2k3mJop

“BTC forming an ascending triangle on the 4h. Target is $5,671 which is right in line with horizontal resistance. Stop market order entered to long at $5,186 with stop loss at $4,949. If target is reached I will be taking full profit and looking to go short.”

A short pull back is expected by various analysts as BTC has several resistances in its path moving forward with $5k to $6k area being the major resistance zone. As we reported earlier, we would be moving into the second accumulation zone after the $3k-$4k range.

However, this team of traders is still expecting the top cryptocurrency to see a pull back of about 30 percent that would see it at below $4k yet again. According to Tradingshot, a professional trading analysis platform, on the basis of 1-day RSI, we are up for another pull back in the very near future. It has been explained that since the price action crossed over the 200 DMA (shown by orange line) during the last bear market that practically signaled the end of the bear cycle, every time the RSI jumped over 83.000 Bitcoin declined at least 30 percent.

Now, in the current cycle, this puts the pull back to about $3,800. This current consolidation and accumulation period according to Tradingshot will offer a few buy single before the next bull market completely takes over the market for a new all-time high (ATH) leaving the current lows behind.

It has been further shared that 1W RSI and Mayer Multiple gives the final buy signal in the period of June and October just like in 2015. The cycle bottom seems to be indicating that we are on the early stages of the new bull cycle. With third Bitcoin halving, a historically bullish event coming in 2021, that year is expected to be a wild one for Bitcoin prices that could take Bitcoin as high as $1 million as per some permabulls. Speaking of permanent BTC bullish analysts, Max Keiser pointed out that the bitcoin value has not been lower since the Federal Reserve affirmed ‘Infinite QE'.

Stay on the look out as we also explain this accurate bitcoin price prediction analysis from an anonymous 4chan user who correctly (so far) said the markets were at a bottom of $3,100 BTC/USD in December 2018 (a yearly low) and has correctly forecasted the April 2019 exchange rate value to be $5,300 which Bitcoin surpassed this weekend. 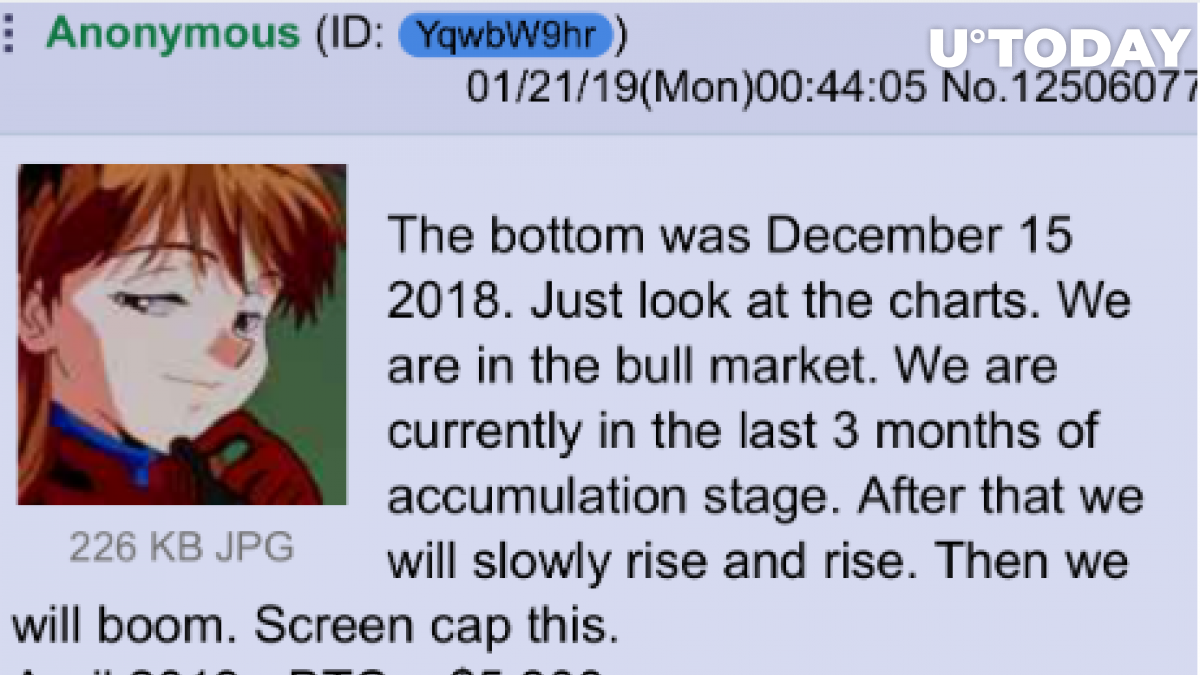