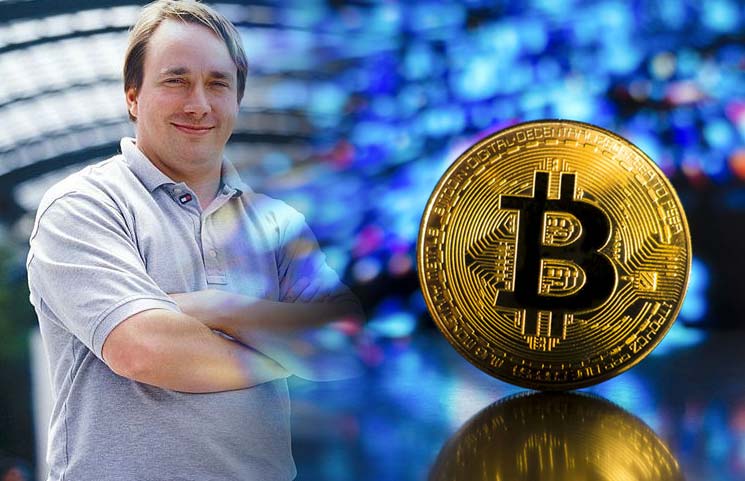 Is The ‘King Of The Geeks' The Creator Of Bitcoin? The Argument About Linus Torvalds

Is The ‘King Of The Geeks' The Creator Of Bitcoin? The Argument About Linus Torvalds

A dramatic over extension in the volume of lending, the integration of sub-prime mortgages and other toxic assets into Mortgage Backed Securities (MBS') were not components that came up as a surprise during the recession of 2008. On May 3rd, 2007, these rumors emerged as just some of the concerns, and used as a reason for why the digital asset – Bitcoin – should be seen as a truly breakthrough invention. Bringing digitalized cash to the broader public.

The man, giving this talk was none other than the ‘King of the Geeks,' Linus Torvalds. He has since managed to gain a couple of other nicknames like ‘The godfather of the ope-source movement,' even being considered ‘one of the revolutionary heroes of the past 60 years.' In context, what was he actually talking about? He was, in fact, presenting his own solution known as Git.

This refers to a system which would allow for the wholly decentralized collaborative solution, giving users the ability to share code through replicating file copies into all ‘computers' that are interested in the information.  These same users would then be updated whenever the code changes.

One of the ways that we could define Git is almost as a highly mutable blockchain – considering that it stands as a version control system, operating on a structure that is interestingly similar to a Merkle Tree, a now commonly used Layer-2 solution by Blockchains like Bitcoin.

“Let’s say there’s a humongous tree under Git, would it be possible to check part of the tree?”

This is one of the questions that was asked by a member of the crowd.

Torvalds replies with gusto, complimenting the audience member for the question. Before going on to explain it further, asking why you wouldn't want just one specific file, but an entire repository of files. Along with how the former would have a certain amount of issues with scalability. All before elaborating on just how Git operates in a highly efficient manner.

One of the questions that does come up is this one – is this where the concept of Bitcoin began?

Linus Torvalds – King Of The Geeks And The Shy?

“Based on my own calculations from Tip4Commit’s publicly available tip data for the Linux project, Torvalds had earned at least 0.172 bitcoin.”

This is according to the ITWorld team all the way back in 2014.

It's interesting to consider the fact that this same amount of BTC would be worth a little more than $2,000, an impressive amount of maturity. Torvalds does happen to be pretty rich himself. Having a net worth of more than 150 million dollars.

One of the reasons that Torvalds has managed to rack up this amount of capital is thanks to the shares he accrued in Red Hat Linux. These shares were allegedly given to him as thanks for creating the open-source OS that has since exploded into an operating system that helps run a large amount of the world.

Beginning his ‘career' as one of the radicals on campus, Torvalds belongs to an innovative and radical generation that came to the forefront of technology with the introduction of computers during the 70s and 80s.

This means that Torvalds belongs to the same brood of intellectuals including Steve Jobs, Bill Gates and other, lesser-known innovators like Richard Stallman, Torvalds can effectively be thanked or condemned for what we see from the internet in this day and age.

He is a seriously major figure in the field of computer science, and now that Jobs has departed, Torvalds is an even larger figure. But with this lineage of innovation, why has he spent almost his entire career and has not uttered a single word about Bitcoin?

There have been times when he was asked by email and sometimes via social media. He, of course, provided no response. There have clearly been more than a good number of people, many of whom have likely not received as a response either. Along with all of these enquiries, Google doesn't seem to have a single quote on record that relates to Bitcoin coming from Torvalds.

When the article came out back in 2013/14, it would have otherwise been pretty well understood why. But years on and this silence says a lot more than words have.

Personifying A Paradox – The ‘Communist-Capitalist'

“By giving away his software, the Finnish programmer earned a place in history.

Linus Torvalds was just 21 when he changed the world. Working out of his family’s apartment in Helsinki in 1991, he wrote the kernel of a new computer operating system called Linux that he posted.

If anyone does and has demonstrated the skills needed in order to put together this kind of technology together and put it to use within an ecosystem that prevents the prospect of copying individual files, then it would be Torvalds.

Having answered that one mans question about the single file may have in fact sparked Torvalds interest in shifting direction to the matter of digital money. Made all the more critical a talking point considering the kind of economic issues going on in the background during the time of that talk.

According to some, with the formulation of Bitcoin by Satoshi Nakamoto back in 2007. It ultimately culminated in the piecing together of components that they were otherwise unable to stop thinking about.

Some of the comments that Nakamoto received regarding his code include individuals who say it looked like the creation of someone who was more effectively trained in ‘old' practices and code languages. Other members of the community had otherwise referred to his temperament as being brash on many occasions.

“If you don’t believe me or don’t get it, I don’t have time to try to convince you, sorry.” – This is one of the quotes that a good number of community members can recall from memory.

These pieces fit together a little too perfectly. The sudden decision on Nakomoto's part to go off the radar, which was explained initially by Nakamoto as having moved on to other projects less than a year after successfully launching Bitcoin. It all seems to fit more effectively with someone who already has a considerable amount of fame and wealth behind them.

This gets us onto the subject of those millions of Bitcoin that Nakamoto locked away in a digital wallet all those years ago. What's the actual purpose of holding them as opposed to putting them into circulation?

“I think I was named equally for Linus the Peanuts cartoon character.”

One of the other things that came to our attention was, Ash of Pikachu is allegedly better known in Japan as ‘Satoshi.'

There are plenty of hints out there that can be pieced together to construct an argument as to the real identity of Satoshi Nakamoto, yes. But they all inevitably end up being placed in the same space. As possible theories and brash speculation – little else gives them credence apart from coincidence or some kind of odd rationale.

As someone who was introduced to Stallmen before anyone was around, Nakamoto's ability to remain private and otherwise unknown for all of this time, for Torvalds – this would have otherwise been pretty easy to accomplish.

“I am reminded of this every time I see a commit hash [on Git]: bdd5fd74686bdee484227eb42d21190618a59ce4. That looks very similar to a blockchain address! I know that it is just common SHA encryption, but always feels like an eery coincidence to me.”

If ever this kind of evidence was placed in front of Torvalds, it's likely that he would categorically deny it, or laugh and be slightly complimented by the comparison. But it's likely that he'll just keep an eye of silence, which indicates his own desire to reserve the option to confirm or deny.

That's entirely up to him to decide to do. It may very well be the case that this is all just interesting speculation on the part of people doing the information scraping for this correlation. But if he is, in fact, the creator of Bitcoin, then his exit was probably a kind of accident on account of his already busy schedule of taking care of Linux.

Since it was first introduced, Bitcoin has taken on a whole life of its own, during this time, it's cultivated its own range of ideologues, maximalists and hardcore advocates. If Torvald's were connected to the Bitcoin ecosystem, he would possibly comment on how foolish it is to combat each other instead of pressing up against the politics of the time and focusing their energy on refining the technology.

“Any intelligent fool can make things bigger, more complex, and more violent. It takes a touch of genius — and a lot of courage to move in the opposite direction.”

Facebook
Twitter
Telegram
ReddIt
Linkedin
Email
Previous ReviewAfter Allegations Of US Traders Still Using Their Exhange, Bitfinex Promises To Try And Prevent It
Next ReviewThe War On Bitcoin Is Starting, And Embracing Real Struggles To Happen Is Smartest Thing To Do

This Analyst Uses CNBC Tweets As Reverse Indicator Of Bitcoin Prices The biggest name in financial media, CNBC, have been infamous for their dreadful and...
Read more