The cryptocurrency industry is a sea full of different species of people; the bulls, the bears, the optimists and the pessimists, scammers, shills, developers, traders, and so many more different kinds of people. In this speculative world of cryptocurrency, there exists a unique kind of people who not only participate in the development of the ecosystem but move sections in the community and fairly (or not) give advice on the development of the ecosystem – the influencers. The field is full of these kinds of persons but only a few of them add value to the project they speak of the same way this guy does. Whether at social meetings, conferences or on social media he pulls the cryptocurrency masses. Twitter and Reddit currently host the largest cryptocurrency communities, both of which he has massive influence over, he is – John McAfee, the creator of the McAfee antivirus software.

McAfee turned towards cryptocurrencies in the early ‘10s and has since influenced the cryptocurrency industry with investors mostly leaning to his side in crypto related matters. In the past few days, McAfee’s tweet on his stance on Bitcoin and Ethereum has made rounds across the cryptocurrency communities raising different reactions. The series of tweets mocked the names of the coins and further the founder of Ethereum, Vitalik Buterin.

It was all fun with the replies further trolling the two coins – all in good faith!

In his first tweet, John answered the multiple questions thrown at him on his opinion on the second largest cryptocurrency, Ethereum. He wrote in the tweet his dislike for the spelling of Ethereum and only held a special affection for coins with one syllable names. He further criticized the “dressing code” of ETH holders saying,

“Additionally, many of my friends who hold Ethereum dress oddly. And, of course, Buterin looks underfed to me.”

However, he cautioned investors from basing their trading decisions from his statements. He concluded the tweet writing,

“But do not take this as investment advice.”

John McAfee has in the past predicted that Bitcoin (BTC) will cross the $1 million USD mark but did not hold back on dissing the coin when asked about it. Responding to a question on the one syllable rule, McAfee said his prediction did not per se mean that he liked the coin. “Did I say I liked it? Merely predicting its rise. The name itself connotes “Tiny Coin”. My friends own hearty sounding coins, or adorable coins like “Doge”. I could cop out of course and say “BTC” but then that's three syllables and would demonstrate my ignorance.”

The comments made by the tech genius did not reflect directly on the price of Ethereum or Bitcoin even as the two lost 8% each in the past 24 hours. The cryptocurrency market is currently facing a pullback after BTC crossed below the $7000 mark briefly on major exchanges. 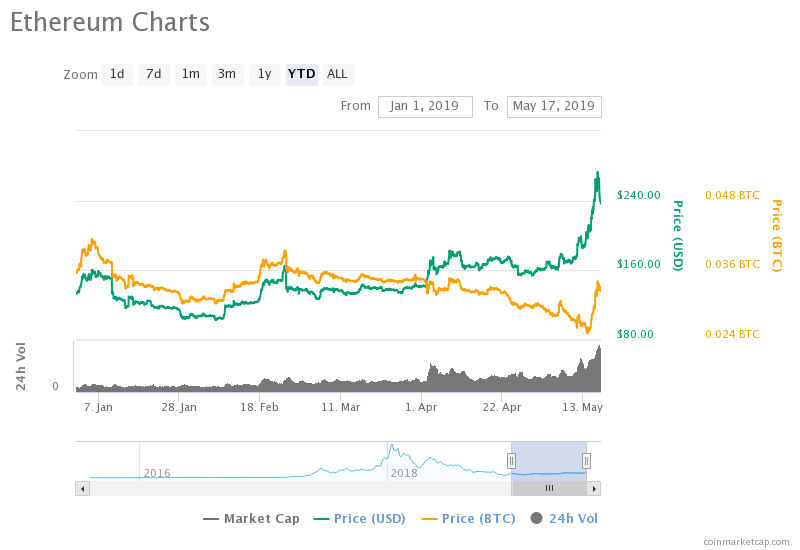