Soon after a famous crypto analyst, Lucas Nuzzi made his 2020 prediction for the Bitcoin’s (BTC) soft fork, one Reddit user asked several in the Litecoin (LTC) community questions section, about the plans for the Shnorr-Taproot upgrade.

On January 19, this Reddit user, who is very curious about how cryptocurrencies are developing from a technological point of view, asked if the Blockchain silver network is going to go through a Schnorr-Taproot upgrade. The LTC developer responded with this: 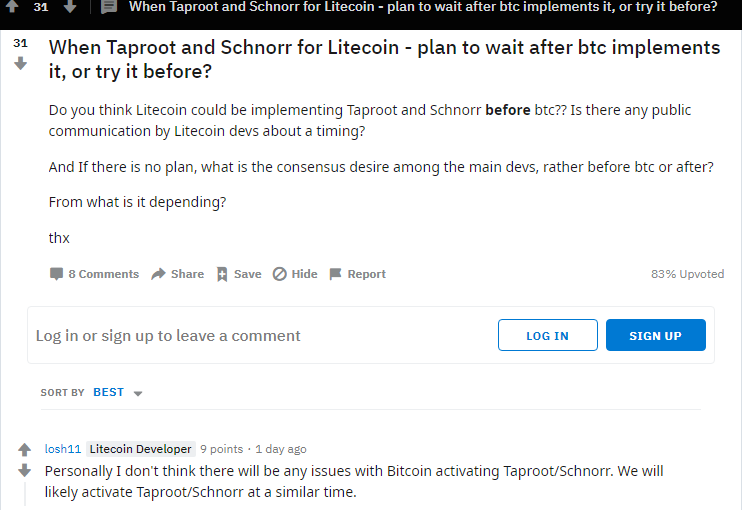 LTC before or after BTC?

Another user who’s always asking the most interesting questions about blockchain projects decided to talk about LTC developers’ plans, trying to uncover what they’re intending to do. Therefore, he addressed the question regarding the network upgrade being made with the roll-out of Taproot schemes and Schnorr signatures for the reason that this would highly increase security.

Losh11, another user who may be the LTC developer Loshan T, decided to answer him by saying neither BTC, nor LTC, have any business to implement this type of upgrades. Lucas Nuzzi thinks the upgrade may be a soft fork for the Bitcoin (BTC) network this year.

Litecoin (LTC) is Being Very Private

All in all, the Schnorr-Taproot upgrade will change the way transaction mechanism of signing in on to the Litecoin (LTC) network is taking place, allowing multi-signature options to be developed. The same upgrade is sure to be complementary with the MimbleWimble protocol implementation into the same network. It can be used to hide transaction data and to make things more confidential in the blockchain.