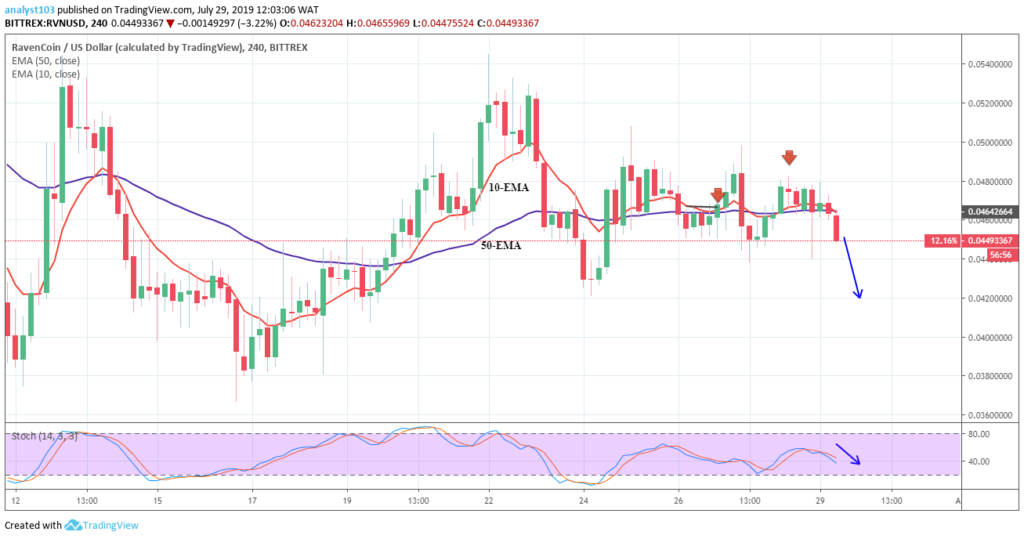 RVNUSD is in a bearish trend in the medium-term outlook. The cryptocurrency had a brief relief over the weekend as price surge to $0.04985 in the supply area before the loss in the bullish momentum. The bears maintained dominance as the market wrap up yesterday with a drop in price to $0.04400 in the demand area.

Although today’ market opened bullish at $0.04656 with the coin up briefly at $0.04794 and closed as an inverted pinbar, an indication of a trend reversal. Increased bearish led to the break down at the support of the two EMAs as price fell to $0.04462.

The signal of the stochastic oscillator points down at 37% with price below the two EMAs, it implies downward continuation in price with increased bears momentum.
$0.04200 in the demand area is on the card as the bears' journeys down south in the medium-term.

The bulls lost momentum at the 61.8 fibs at $0.04818 shortly after the rally as the market opened yesterday. $0.04400 in the demand area was the low the bears could go before exhaustion sets denoted by the long-tailed candle.

The two EMAs were broken shortly after today’s opening paving the way for a downtrend continuation in the short-term.

Price is down at $0.04462 around the 23.6 fib area and the stochastic oscillator signal [points down at 37%. These suggest a downward momentum in price in the short-term.
$0.04379 the previous low on 27th July is up for a retest as the journey down south continues.