Good week for XRP adoption as the coin gains addition on a cryptocurrency wallet and exchange.

The cryptocurrency community showed massive unity towards a common goal as XRP gained trading pairs on the Bitfi cryptocurrency wallet. The announcement made on the official Twitter account of Bitfi (@Bitfi6) showed support for the XRP community calming the harsh criticisms the coin faces from Bitcoin maximalists. The tweet read,

You asked, we listened. XRP is launching in Bitfi soon. And no, it is not like Bitcoin, poses no threat to Bitcoin, & serves a completely different purpose. Let’s keep an open mind & make the entire community stronger. Spread the love ❤️ #xrp #ripple pic.twitter.com/RqSgl2UYEG

The XRP community have had a massive presence in social media interactions as they aim to push for global adoption of the coin. Bitfi had to heed the call and list XRP after a number of requests which further promotes adoption of the Ripple-owned digital asset.

The announcement on Twitter has since received hundreds of positive comments, likes and retweets showing a boost in the unity of crypto communities. In a follow up tweet, the cryptocurrency wallet social media team showed their excitement on the support received from the XRP community promising innovative solutions for their users. 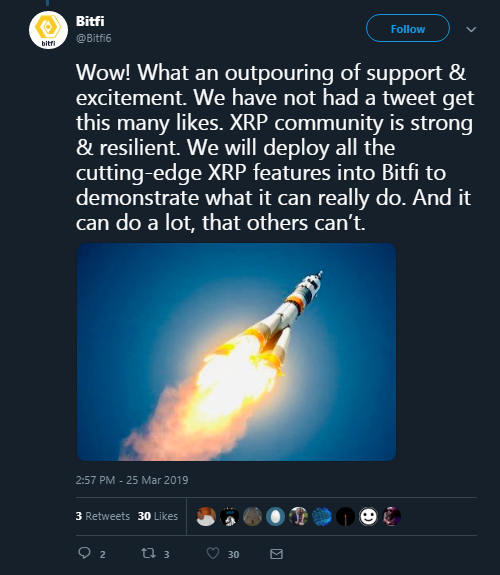 The cryptocurrency wallet is heavily oriented to Bitcoin (BTC) trades hence XRP will offer more diversity in options for their consumers while increasing the market base for the coin. Bitfi crypto wallet plans to add a couple of more coins to its arsenal including Digibyte (DGB) and Tezos (XTZ), two of the most asked for coins on the exchange.

The XRP asset has had quite a week as Bitrue crypto exchange also announced the addition of three pairs on the platform with XRP as the base currency. The three pairs are Dash (DASH), Storm (STORM) and Basic Attention Token (BAT). The XRP deposits and withdrawals on the exchange were halted to facilitate the addition and trading on the digital asset resumed on 23rd March 2019.

The exchange aims to promote adoption and trading on the new XRP pairs as they prepare an airdrop and a 7.3 % interest bounty for their customers.