Survey Reveals Bitcoin Ownership At A Staggering 6.2% While 65% Don’t Own And Won’t Buy Crypto

Trading & Investing
Survey Reveals Bitcoin Ownership At A Staggering 6.2% While 65% Don’t Own And Won’t Buy Crypto

A recent survey of 5000 Americans between the age group of 18 and 65+ about bitcoin ownership revealed interesting insights. Out of the total number of surveyed people, 6.2% of Americans responded that they have already invested in the digital currency, while 7.3% showed interest in investing in it in the near future. The survey was conducted by a crypto media outlet, Cryptoradar. 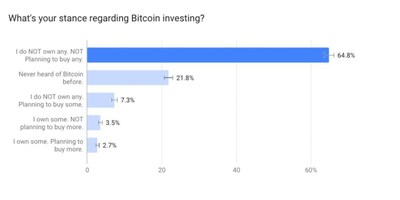 In the survey, all 5000 people were asked a simple question with multiple options,

What's your stance regarding Bitcoin investing?

The responses of the survey showed that 64.8% of people had never owned any Bitcoin, and they had no plans of investing in the digital asset any time soon. The percentage soared to 68.8% when the response was narrowed down to people between the age of 55-64, and the percentage grew to 74.for people above 65.

Interestingly, 21.8% of the surveyed Americans had never heard of Bitcoin. The percentage increased to 24 when only female responses were taken into consideration. The percentage grew to 29.6% when the demographic filter only targeting females between the age of 45 and 54 was considered.

Terry White, head editor at Crypto Radar commenting on the results of the survey stated,

“Despite its enormous volatility, Bitcoin is a very attractive investment for those investors, especially younger investors, who are willing to ride the volatility to potential future gains.”

The crypto radar survey should not come out as a surprise given bitcoin is merely a decade old, with still some of the basic issues with any emerging tech, which includes its scalability issue, price volatility, the lack of knowledge about the tech outside the centralized space and many more.

The survey also showed that most of the people who are planning to invest in digital assets are fairly young between the ages of 25 and 34, which is understandable given youngsters are more inclined toward technology products in any domain, over their elder generations.

However, the community should also focus on educating the masses about the advantages of decentralized money, before anyone thinks about investing. A major percentage of people who have even heard of Bitcoin still keep a safe distance considering it to be a highly risky investment.

Though relatively new to the cryptocurrency and blockchain space, Silvia has a strong interest in the field and a love of writing as well. She brings an interesting take to current happenings in the industry and enjoys introducing the latest developments to cryptocurrency and blockchain enthusiasts alike. She’s excited to promote a vibrant and fresh discussion as the industry continues to develop and move forward.