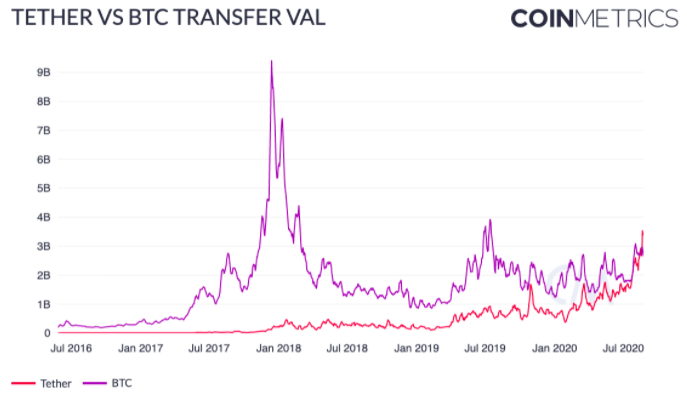 Stablecoins are increasingly used in popular DeFi applications like Uniswap and Curve, both of which contributed to Tether's recent surge.

Popular in Asia for on and off-ramps, Tether has also been used for capital flight in China, as per Chainalysis report. Chinese investors moved about $50 billion overseas over the past year due to the devaluation of yuan and trade wars.

USDT has been enjoying massive growth in 2020, whose total supply has also hit the milestone of reaching over 13 billion on August 21st. The supply grew at a rapid rate, as it was less than 10 billion on June 1st, 2020.

In less than five months, Tether supply has grown over 2.6x, from less than 5 billion on March 1st.

Over 66% of Tether’s supply is issued on Ethereum, while the remaining 34% is spread on Tron, Omni, EOS, Liquid, Algorand, SLP.

Tether is further expanding to more networks as it recently announced that this expansion would now cover OMG Network. On August 19, a new USDT integration went live on the Ethereum-based layer 2 protocol.

This resulted in the daily active addresses of OMG Network shooting up to their highest levels since August 2018 and bringing record ETH fees, which went up to new all-time highs due to the rapid rise and fall of YAM, back down to earth.

Tether is the biggest gas guzzler after Uniswap on Ethereum Network and paid $6.4 million in fees in the last 30 days, as per ETH Gas Station. Despite a 28.4% drop week-over-week, ETH total fees remain relatively higher which resulted in bringing ETH average daily transaction fees over the large week to $3.8 million compared to bitcoin’s $1.4 million.