Today, a superseding indictment was released by the Department of Justice’s website with regards to two individuals named ‘Ravid Yosef’ and ‘Reginald Fowler’.

Below is a copy of the (now unsealed) indictment of these individuals from the United States Southern District of New York:

At first glance, these names do not appear to have any obvious connections to Bitfinex/Tether (hereby referred to as iFinex for the sake of convenience in this piece).

But this article will explore how the two are intrinsically related and why this spells imminent death for iFinex.

Details About the Superseding Indictment

Before we even begin digging into this superseding indictment, let’s go ahead and take a look at the definition of ‘superseding’.

The legal definition of a ‘superseding indictment’ is:

“An indictment that replaces a previous indictment. These indictments are usually filed when new evidence has been found and new charges need to be filed.” —

Details About the Individuals in Question

Specifically, the indictment names two individuals, which are Richard Fowler and Ravid Yosef.

The latter name is an individual that has already been identified by cryptocurrecy researchers such as ‘ProofofResearch’ as well as ‘Intel_Jakal’ (both researchers post under aliases for varying reasons).

Below is an example of said research:

filings confirm her gender. cross-referenced against various social media accounts but i'm not posting personal pics (or addresses). I did spend alot of time google translating Hebrew to English. one of those names connected two of the directors together as family. pic.twitter.com/YdaAnTjgcE

Above are tweets posted a few days before the release of this indictment that definitively peg ‘Ravid Yosef’ in connection to Crypto Capital Co.

This individual (among others) were traced down by sifting through shell companies that Bitfinex exchange was banking through in order to remain solvent.

As the tweets above state, this individual is specifically related to the shell companies:

Given their relationship with Crypto Capital Co., Ravid Yosef is also inherently tied to ‘Crypto SP ZO.O.O’, which is intimately tied to the Polish bank that was raised for over half a billion USD in 2018 (March) as well.

How iFinex is Tied to This Situation

From the OAG’s court filing, it is now 100% confirmed that Bitfinex was using Crypto Capital Co., as their banking partner: 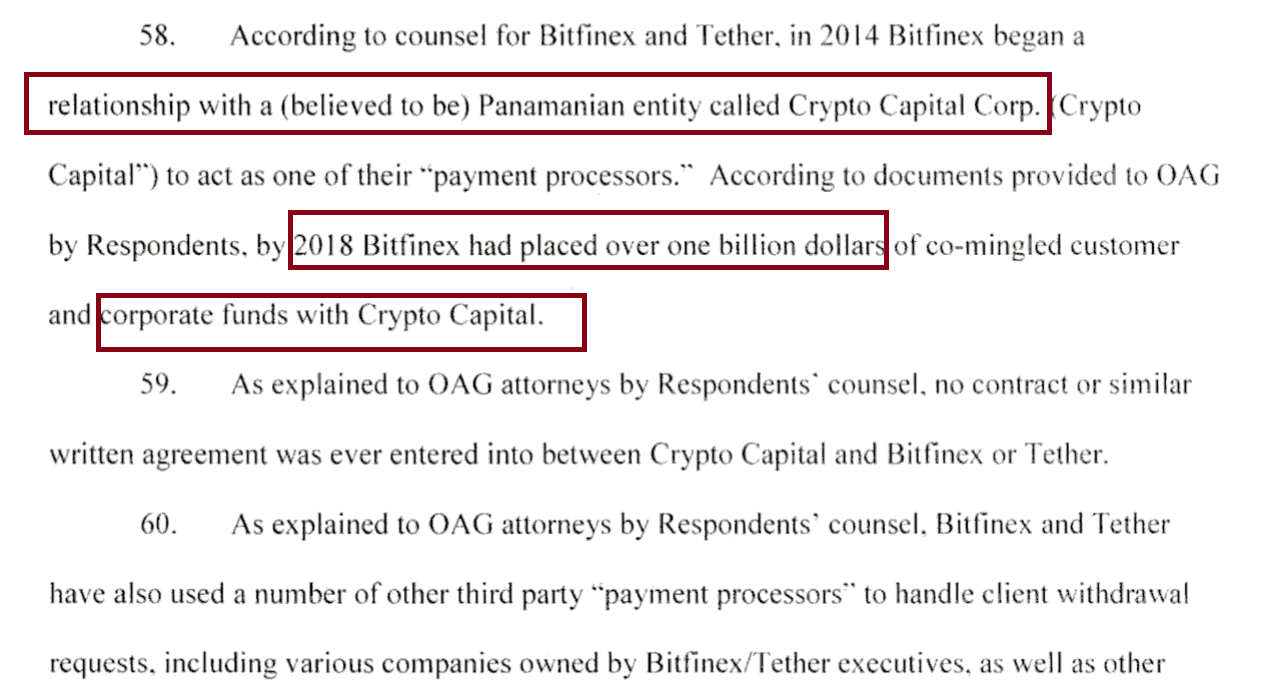 Bitfinex was also listed on Crypto Capital Co., for a significant period of time (before eventually being removed after attention was drawn to this by cryptocurrency researcher, ‘ProofofResearch’): 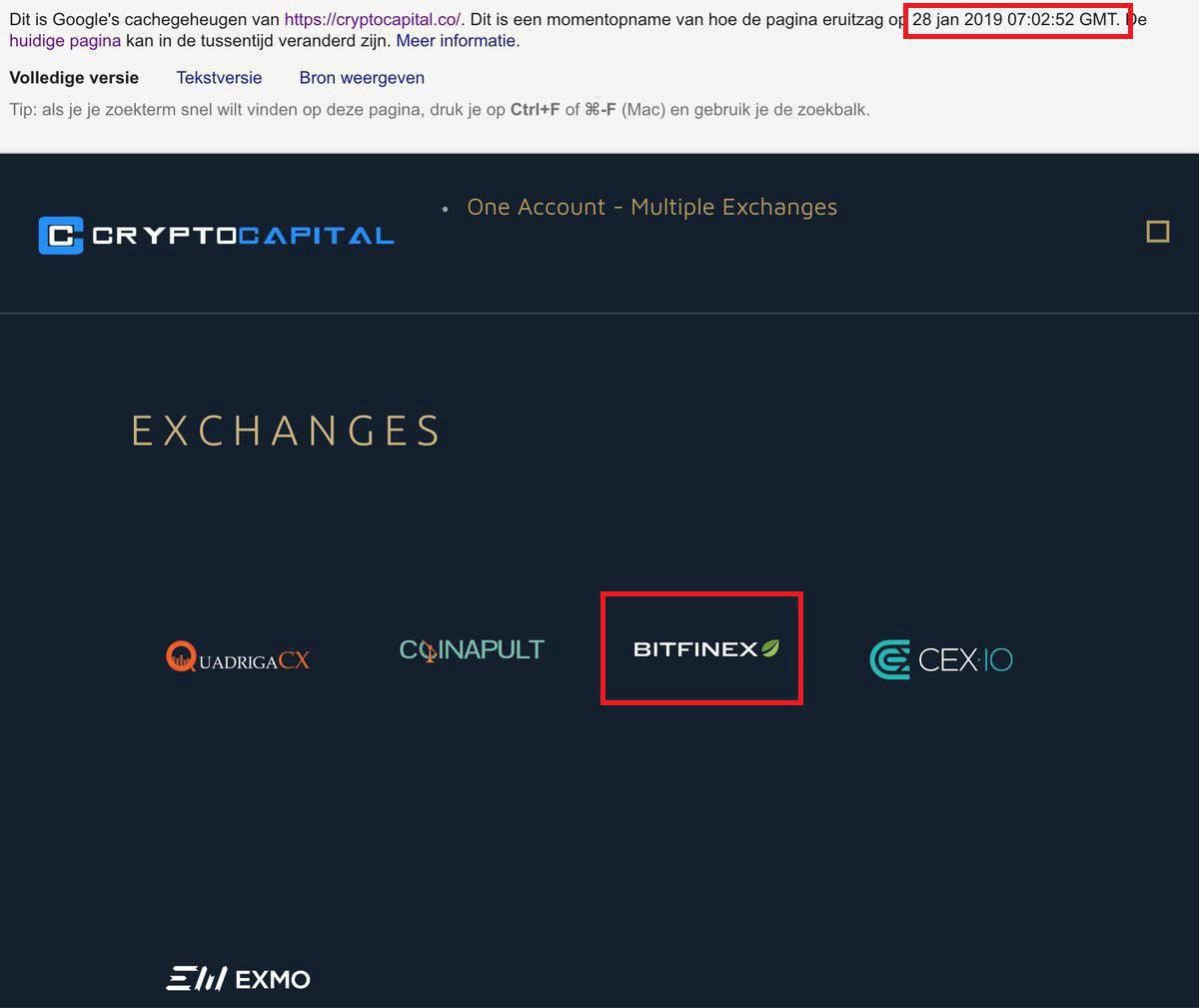 In addition, the $500 million+ worth of funds that were seized from a Polish bank in 2018 were found to be definitively connected to Bitfinex, QuadrigaCX, CEX.io, and Crypto Capital Co. as well:

Specifically, the three exchanges listed above were directing customers to deposit funds at this Polish bank, which was opened by a shell account and that shell account was, in turn, owned by Crypto Capital Co. (99% share acquisition).

At the time of writing, Crypto Capital’s website still reflects that it is “Owned and operated by Global Trade Solutions AG”.

This information will be of significance as we uncover more information about the indictment itself.

Preliminary Takeaways Before We Hop Into the Indictment

Given the information presented above, the connections between Ravid Yosef, Crypto Capital Co., Global Transaction Services/Global Trading Solutions (hereby referred to as ‘GTS’ since they are both one in the same), and iFinex are extremely evident, thorough and virtually indisputable at this point.

Therefore, this indictment should be seen as the toppling of the payment structure that has essentially governed Bitfinex’s deposits over the last year, at least.

Implications for iFinex will be explored in detail soon.

Taking a Look at the Indictment

The indictment includes four counts against the individuals, Reginald Fowler and Ravid Yosef.

The counts are as follows:

Reviewing Information Under ‘Count One’

To summarize, the first count states that Reginald Fowler and Ravid Yosef both opened up bank accounts in the United States under the pretense that they were related to a real estate business.

The indictment alleges that this was materially false information and that both Fowler and Yosef were well aware of this fact.

In addition, the indictment asserts that the bank accounts were actually used by:

“Fowler, Yosef, and others to transmit funds on behalf of an unlicensed money transmitting business related to the operation of cryptocurrency exchanges.”

Specifically, this indictment is stating that they were moving funds on behalf of a “money transmitting business related to the operation of cryptocurrency exchanges”, and not the exchange itself.

This most likely refers to Crypto Capital/GTS.

Does That Mean Bitfinex is Off the Hook?

In addition, the OAG’s report also stipulates that Bitfinex did not follow proper procedure/protocol in performing KYC/AML on the exchange.

Specifically the OAG Inquiry into Crypto Exchanges had this to say about Bitfinex’s KYC/AML procedures:

This second count alleges that Fowler and Yosef (and others known and unknown) ‘defrauded’ financial institutions by depositing funds which they misrepresented the origin of, in order to,

“[O]btain moneys, funds, credits, assets, securities, and other property owned by, and under the custody and control of, such financial institution, by means of false and fraudulent pretenses, representations, and promises, to wit, FOWLER and YOSEF opened and used numerous bank accounts at financial institutions that were insured by the Federal Deposit Insurance Corporation, including a bank based in Manhattan, New York, and in so doing falsely represented to these financial institutions that the accounts would be primarily used for real estate investment transactions though FOWLER and YOSEF knew that the accounts would be used, and was in fact used by FOWLER, YOSEF, and others, to transmit funds on behalf of an unlicensed money transmitting business related to the operation of cryptocurrency exchanges.”

There is a lot to unpack here, but here are the most relevant points that individuals should take away here:

Again, this last bullet point mentions the phrase ‘cryptocurrency exchanges’, yet in the same context that it was mentioned in the first count. We know from all the information that we have unpacked up to this point makes Bitfinex the likely crypto exchange that this report is referring to.

What is also worth noting is the mention of ‘others’ in this count of the indictment. The reason why is because the indictment specifically deals with the transmission of funds “for an unlicensed money transmitting business”, which is something that Bitfinex is undoubtedly guilty of if we evaluate the hundreds of millions of dollars that Bitfinex transmitting to Crypto Capital Co. for one reason or another.

This count alleges that throughout 2018 (from February to October), Fowler and Yosef conspired to defraud the United States itself via the operation of their ‘unlicensed money transmitting business’.

“It was a part and object of the conspiracy that REGINALD FOWLER, the defendant, and others known and unknown, did knowingly conduct, control, manage, supervise, direct, and own all or part of an unlicensed money transmitting business affecting interstate and foreign commerce, in violation of Title 18, United States Code, Section 1960.”

This indictment specifically states that this was facilitated through the operation of a bank in Manhattan, New York, with the purpose of conducting an unlicensed money transmitting business.

Specifically, the author has intimate knowledge that this intermediate bank was none other than ‘The Bank of New York Mellon’, located in New York City.

They also used Deltec bank, which relied (relies) on CIBC Mellon in Pittsburgh, Pennsylvania as as an intermediary.

This information is presented below (which was granted by a confidential source that did OTC business with Bitfinex):

This serves as ample evidence that Bitfinex was, indeed, doing business in the United States and specifically in New York as well.

The (un)sealed indictment also specifies provisions for which the assets acquired by Fowler and Yosef will be forfeited (it appears that all of the U.S. assets were in possession of Fowler, according to the indictment), which are: It should now be clear at this point that there is absolutely no chance that iFinex receives any of their funds from any U.S. banks that have been shutdown, contrary to what they stated earlier in the week in an e-mail to customers:

Specifically, Bitfinex stated that they, “Have been advised that these amounts — whether in whole or in substantial part — are, in fact, seized and safeguarded in several jurisdictions, including Poland, Portugal, the United Kingdom, and the United States.”

We now know that the funds located in the United States will not be retrievable.

Specifically, Bitfinex more than likely contributed significant funds in the United States since more than half of their banking sources were located somewhere in the U.S. (and subsequently closed/seized at some point).

Below is a post that breaks down in exquisite detail exactly what Crypto Capital’s role was with Bitfinex and where they were banking throughout 2018:

This report bodes terribly for iFinex for a few reasons:

iFinex’s close association with Crypto Capital Co. also puts them directly in the line of fire as well.

Only time will tell how the impact of this decision reflects upon Bitfinex in the distant future.