The cryptocurrency community isn’t exactly a fan of transaction fee mining, criticizing this process heavily for quite some time. CryptoCompare recently released a report,  Exchange Review October 2019, which showed that TFM is slowly declining. In fact, between September and October alone, it seems that the exchanges that implement this type of mining has dropped 3.8%. The report noted, In October, a total of $370.3 billion was traded by crypto-platforms that charge a fee to do so, which is 9.8% higher than what was recorded in September. The exchanges that use TFM traded less than half of that amount ($181.42 billion), though they only showed a decline of 3.8% from September to October. Based on the data shown in the report, the rest of the volume accounted for the exchanges that don’t charge much of a trading fee, totaling $6.69 billion. 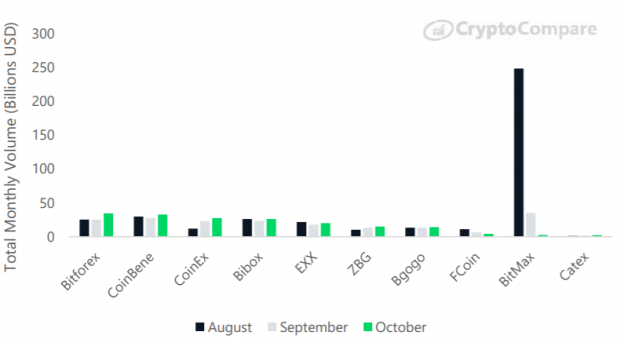 “Zero-fee exchanges as well as transaction-fee mining exchanges present a problem when it comes to assessing whether trading volume as well as pricing are legitimate due to the well-known criticisms of exchanges engaged in these practices.”

Of all of the transaction fee mining exchanges, transaction fees are 100% rebated with the use of exchange tokens from the exchange that allow it. Realistically, this opportunity can encourage traders to participate in more activity on the exchange in the hope of getting more tokens. The blog added that this frequently has features or dividends, which put exchanges at risk for hosting wash trading.

The Exchange Benchmark at CryptoCompare was developed as a result of concern regarding crypto exchanges getting involved in wash trading and other schemes to pump up volume. By publicizing these reports, traders in the market can have the transparency desired for the smartest activity.