Institutions are also active but not as much as they were in Q4 of 2020. Retail armed with stimulus checks is taking charge of the bull market now.

Bitcoin has seen a lot of adoption recently as corporations adopt the leading cryptocurrency. But it’s not just the big guys, but retail is just as much into the trillion-dollar asset.

Retail investors have actually purchased more than 187,000 BTC so far this quarter, compared to roughly 205,000 last quarter, based on PayPal and Square data, wrote JPMorgan Chase & Co. strategists including Nikolaos Panigirtzoglou in their Friday report.

Meanwhile, institutions bought 173,000 BTC compared to 307,000 in the last quarter of 2020, based on Bitcoin futures, fund flows, and company announcements. Armed with stimulus checks, $1,200 last time and $1,400 this time, retail is taking charge of the Bitcoin bull market this quarter.

“For many retail cryptocurrency traders, Bitcoin was the bread-and-butter trade of the pandemic. Meme stock trading volatility burnt many, but Bitcoin has maintained an amazingly bullish trend that has made most winners,” said Ed Moya, senior market analyst at Oanda.

“Retail traders got reinvigorated with the latest NFT buzz and as the stimulus checks hit their bank accounts.”

Overall, the number of new participants in the Bitcoin network is growing at an “unprecedented” rate. “Over the past weeks, we have seen a large growth of new entities. This is a strong indication that new retail investors have been entering the space,” noted Glassnode as well.

The longer-term HODLers who keep the coin for over 3 years continue to accumulate BTC, while newer ones who came in the last 6-12 months have been selling into the recent rally. 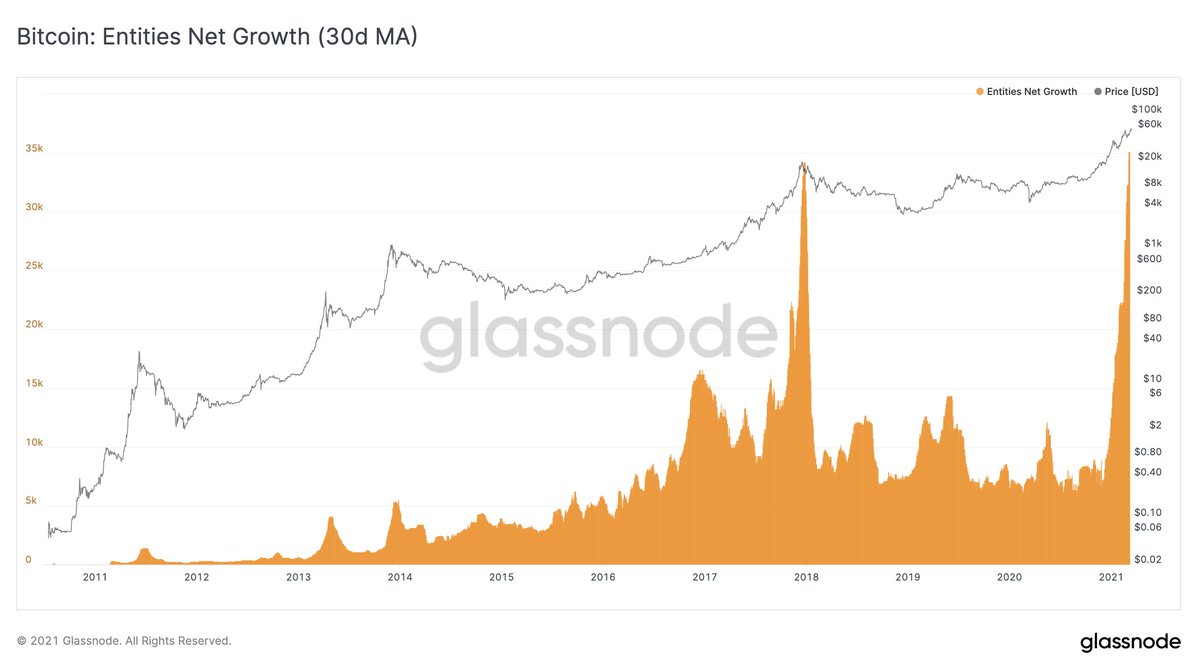 The growing retail mania is also evident in the growth of Bitcoin ATMs, which are coming to the delis of New York City, gas stations in Carolinas, and smoke shops in Montana for customers to buy and sell the crypto asset.

These machines are fast-growing in numbers fueled by the Bitcoin rally. As of January, there were 28,185 ATMs in the US, out of which 10,000 came within the prior five months only. Fees on these machines range from 6% to 20% of a total transaction.

“The growth of the ATM market – it is not even a gentle increase, it is almost a 45% increase,” said Pamela Clegg, director of financial investigations and education at crypto compliance firm CipherTrace. “The growth is quite astonishing.”

Las Vegas-based Coin Cloud has 1,470 machines around the US and is expected to reach 10,000 by year-end.

“We expected the worst as Covid hit, but stimulus payments came out, and that helped quite a bit,” Coin Cloud CEO Chris McAlary told Reuters. “Some people took stimulus and bought digital currency with it.”

Chicago-based competitor CoinFlip, which charges nearly 7% to buy crypto and 5% to sell, had its numbers grow from about 420 last year to 1,800 now. During this period, transactions per ATM nearly tripled. “There are people who don’t have bank accounts or don’t like to use them,” said CEO Daniel Polotsky.

Most of these customers are 25-40 years old, as per Atlanta-based Bitcoin Depot CEO Brandon Mintz, who saw a 2.5x growth over the past year.