When the price of any token drops by a double-digit percentage, it is enough to cause for worry, since there is no assurance that the price will climb back up just as quickly.

However, this price drop gets even scarier when the value of a token falls by 99.9%, which is exactly what happened with WAVES, according to a new post by Ethereum World News.

WAVES Flash Crash By 99.9% To 10 Satoshi On Binance https://t.co/UwxNRQqOi0 pic.twitter.com/Y6X97HWMFT

At 8:52am today, WAVES saw their price fall from 5,070 Satoshis to just 1 Satoshi. Within the same minute, WAVES recovered up to 5,078 Satoshis each, which is a 5000% increase in profit from the seconds before.

Still there is two ways of seeing this activity – the ultimate nightmare or a dream come true. 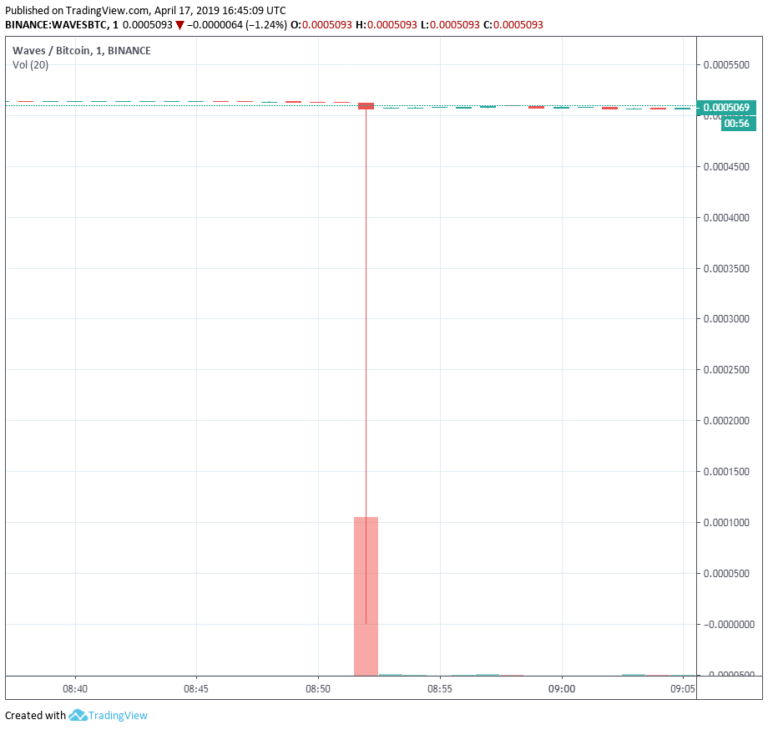 The graph above shows that it is possible that a WAVES whale decided to create a massive sell order, which all but drained the order book.

However, there is no way to really figure out what happened, because the trader’s identity has yet to be confirmed, though there’s still a chance that this whole fiasco is due to an input error.

Unfortunately for the stress levels of some investors, this activity is pretty common for the crypto industry. Another report from Ethereum World News showed a transaction worth a few dollars received hundreds of thousands of dollars’ worth of fees, which is likely due to confusing the fields that they needed to fill.

Last year, a massive order did the same thing to GDax, which is now known as Coinbase Pro. A single exaggerated order took down Ether’s price, from over $100 down to $13 for each token, a loss of about 90%.

Filled all my low orders. ALL OF THEM.

What the FUCK just happened?

Who else got filled on this? pic.twitter.com/h0Kseg97ul

The common circumstance is known as a flashcrash, which only happens when an asset suddenly collapses. These crashes are often easily identifiable, due to the massive emptiness than the transaction leaves behind and the way that the trading volume fluctuates massively.

At this point, there has been no comment made by the Waves team, and no traders have come forth to say that they were the one to perform the transaction. The most recent posts on their Twitter account are primarily regarding the current airdrop that is going from now until April 22nd.