What Caused Bitcoin Frenzy to Jump $5,000 BTC/USD; BTC Price to Fall Back to Below $4K Per Analyst So, what exactly caused Bitcoin (BTC) to make the biggest move since December 2017?

According to Mati Greenspan, senior analyst at eToro, this is a technical move. This move, he says has been building up for a few months now that is since mid-December lows when BTC hit $3,200. Since then, Greenspan notes, “we have been gaining gradual momentum.”

He says this momentum was first picked up by altcoins as we saw “value investing” in them. While Bitcoin during that time, remained stable, altcoins have been surging with some even doubled and even quadrupled in price.

Talking about the 200-day moving average, he says it has been “incredibly important” for quite some time now and BTC finally climbed above this level. He further moves onto explain the key level at $4,100 that many traders have been eyeing, which Bitcoin cleared and jumped above.

This move that has Bitcoin hitting its highest level in five months, according to Oliver von Landsberg-Sadie, the CEO of London-based crypto firm BCB Group, as reported by Reuters has been likely to be triggered by an algorithmic order worth around $100 million that is spread across major crypto exchanges that is Kraken, Coinbase, and Bitstamp.

“There has been a single order that has been algorithmically-managed across these three venues, of around 20,000 BTC,” he said. “If you look at the volumes on each of those three exchanges – there were in-concert, synchronized, units of volume of around 7,000 BTC in an hour”.

Judging by the timing, it looks like the pump originated in Japan or South Korea.

New York is asleep, Europe is just opening their eyes. This is the Asian trading session.

Given the fact that liquidity is thin in the cryptocurrency market with prices being opaque, a large magnitude of orders tend to ignite the buying of algorithm traders, stated the founder of the website CryptoCompare, Charlie Hayter.

As Bitcoin surged over 20 percent, Hayer said, there were 6 million traders in just over an hour which is three to four times the usual amount and these orders were concentrated on Asia-based exchange.

“You trigger other order books to play catch up, and that creates a buying frenzy.”

Over 1m people on Crypro twitter and not a single one can explain the spike! 🤣

Bitcoin (BTC) Price to Fall Back to Below $4k: Analyst 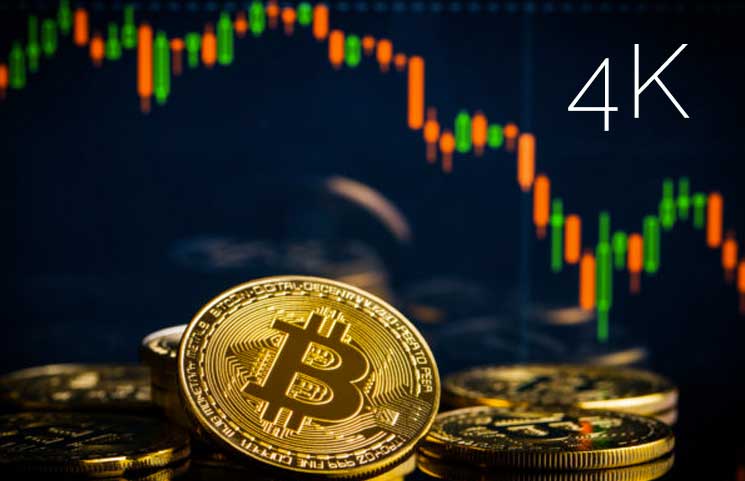 Bitcoin has jumped above $4,600, seeing more than 10 percent gains in the past 24-hours. It even managed to break above $5k at one point.

The leading cryptocurrency by market cap of $82 billion has turned the entire crypto market green that has the total market cap reaching $162 billion from $147 billion.

Bitcoin has No Real Resistance until $5200

In his latest analysis, crypto analyst and trader Magic Poop Cannon, a self-proclaimed “master of the charts” shares the Bitcoin price analysis a few hours before BTC made its way above the critical resistance. Around $4,100, Bitcoin had been going through a tough resistance zone in combination with BTC holding the 50 EMA (the yellow line) very well. What was once a major resistance for the bear market, we have made a “very significant” technical improvement by holding it like a “cellphone while texting.”

If Bitcoin can surpass this resistance zone, Magic says we will surge to the 61.8 percent retrace that falls at about $5,225 and this is what happened today as we broke above the $4,100 resistance level straight to $5,080 on Bitstamp as per TradingView.

As for why, he says, “I expect that such a move would be very quick, simply because there is no real resistance until $5200 or so.” The fact that the market has made bullish advancements, he says this means the bottom is in.

Where would Bitcoin go from here? According to Magic, if Bitcoin breaks above $4,400 level and rallies hard to $5,225, he expects it to fall back towards $4k level and even lower. Though he doesn't see BTC going much lower than $3,500, we will trend in a “sideways direction” for the majority of the year.

“The bear market has ended, and we are now in a transition phase, which should take several months to develop into the beginning stages of the next bull market.”

“Today’s spike in Bitcoin’s price was caused by more people buying and holding.”

(Media, feel free to quote me in the articles.)

We got you Samson!

Bitcoin the king.
Only thing that really matters for alts is the BTC price.
Anyone using the USD price for alts is either clueless, or desperate to see something positive in their bad trades.
Don't @ me. pic.twitter.com/UwBSOnlf27

And we are with WhalePanda!