Bitcoin (BTC) Price
What To Expect From Bitcoin’s Q3? Previous BTC History Shows It Could Be A Lackluster One

The leading cryptocurrency has been enjoying a bull rally since April this year which has Bitcoin surging over 220 percent till date in 2019.

However, it doesn’t mean a drop, more than the one seen earlier this month that took us to $9,600, is not in the picture.

Current Parabola Violation Could Take us to $8k

Veteran trader Peter Brandt says, if the current parabolic phase gets violated, we can go down to about $8,000.

“If current parabolic phase is violated, we could expect either an 80% correction of 7-month advance or much smaller correction w/ definition of new parabola w/ shallower slope,” Brandt said.

Per the chart shared by Brandt, we could chop just like we did in 2018 after the late 2017 surge. Bitcoin could see a correction to $8,000 level:

If current parabolic phase is violated, we could expect either an 80% correction of 7-month advance or much smaller correction w/ definition of new parabola w/ shallower slope. $BTC Note formation of possible 2-wk H&S or H&S failure pic.twitter.com/6IF1bHREAv

Q3 Going To Be A Slow One

The correction may or may not happen but these three months could be expected to be rather slow. Historically, Q1 provides us with fine returns but Q2 emerges with much stronger gains. Q3 however, always has been a slow one, more or less the same as Q1 while Q4 outshines them all. 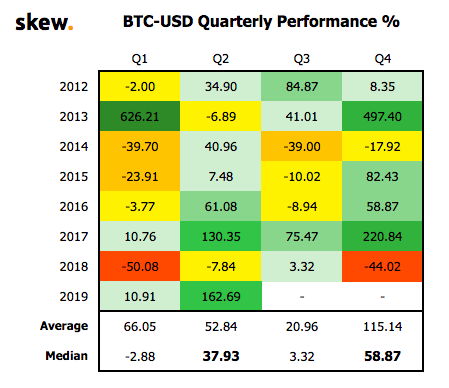 Bitcoin performance in Q3 to be than Q2, expecting to have a slow quarter:

Now that we have had a good start to the year – what should we expect?

Bitcoin seasonality is usually strong – historically Q2 & Q4 are better than Q1 & Q3. 2019 is no exception so far. pic.twitter.com/ClsPfJMtVw

Per this chart, on an average, Bitcoin price could see a surge of about 20 percent which means, we might not be breaking the all-time high record set in last bull cycle at $20,000 in this quarter.

But this could very well be a blessing in disguise. This quarter is the perfect opportunity for people who either missed out or looking to add more BTC to their bags before we move onto the monster rally.